Here at Disney Parks, the three-dimensional stars of our attractions are animated. It’s been that way since shortly after Audio-Animatronics development began decades ago. But our latest innovation takes it to another level.

We’ve unveiled the first-ever Disney figure that can hear, see and sense whether or not you’re in the room. Yes, “Otto” is interactive. The figure can sense if you’re happy, hold conversations and react, according to Imagineer Scott Trowbridge. 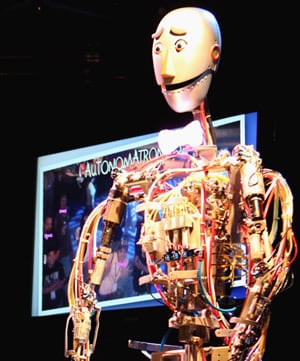 We first mentioned the technology, Autonomatronics technology, via Twitter (@DisneyParks) when Otto was displayed in our Disney Parks and Resorts Pavilion during the D23 Expo. Now, we have details.

Otto can also detect a number of things about a crowd, including how many people are in attendance. And Otto knows if you’re smiling too. But your smile will be obvious if you’re a lover of things high-tech.

Walt Disney Imagineers are currently working on places where we might put the technology into our Parks and Resorts around the world so you can experience yourself.

And of course, we’ll be bringing you more Autonomatronics technology updates on the blog in the future. Let us know what you think.