Water sketch art on the streets of Magic Kingdom Park stops me in my tracks. It always does. And it’ll likely do the same to you if you’re quick enough to spot it. The Florida sun is not a friend to custodial water artwork but it’s amazing while it lasts.

The way the art is created is unexpected. The custodial crew at Walt Disney World Magic Kingdom Park take the tools of their trade – a broom and water pan – and turn them into instruments to entertain.

During a recent sketch, Shawn Klingensmith, a guest at the Magic Kingdom Park, stopped to stare and told us he shares an appreciation for the short-lived art. “It’s a real treasure because it only lasts a few minutes in the sun,” Shawn said. “It’s just a special thing.”

The inspiration to create the water-sketch characters came from Tokyo Disneyland Park. Operations manager for custodial at Magic Kingdom Park, Kent Krause, said, “Hey, we can do that.”

So, Cast Members from the animation tour at Disney’s Hollywood Studios were recruited to train members of the custodial team. Those who were interested and had an artistic flair were taught to make the characters – just like Tokyo Disneyland. 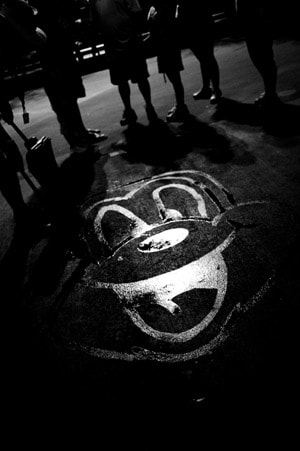 The team’s regular props create unexpected art for Guests. It’s something we call a “Disney Difference.” Expect to see more of these Disney Difference stories in upcoming months.