Quick…think about your last face-to-face conversation — how you used facial movements or arm gestures to show emotion. Disney Imagineers know humans often convey emotions with their hands, arms and eyes and tend to focus much of their Audio-Animatronics development work on it.

A first glimpse at how our three-dimensional figures can display emotions came in the Disney Parks and Resorts Pavilion at the D23 Expo. Now, we’ve got more. 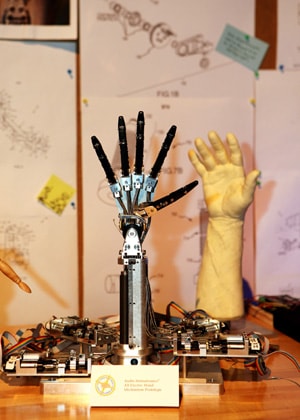 Our newest hand prototype has 15 movable joints which is three times greater than a traditional Audio-Animatronics hand. Today, Disney Imagineering works with cutting-edge electronic servo motors to create realistic hands as well as arms. These compact mechanisms are able to move faster and with greater precision. In the past, Audio-Animatronics relied on pressurized air and hydraulics to generate life-like movements.

“Imagineers have been using Audio-Animatronics technology to bring Disney characters to life for over fifty years, and today we’re continuing that legacy of innovation and creativity by constantly creating new wows for the next generation of guests,” says Scott Trowbridge, WDI VP Research and Development.

Creating skin formulations for hands is also a highly scientific process that involves chemists, material scientists and artist. Imagineers often look to other fields for inspiration since a character’s skin must look as good as new after hundreds of thousands of hours of wear and tear. 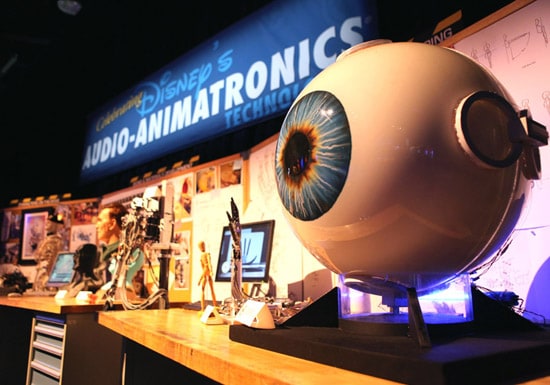 Imagineers realize that the eyes convey emotions and a two-foot eye prototype showcases our newest concept. It’s a new type of mechanism that uses electromagnets to create realistic eye motions. There is only a single moving part — the eye itself — and no wear points. That means faster, more realistic movement and longer life.

As Disney Parks continues to experiment and innovate, as with our newest Autonomatronics technology, we’ll certainly be talking about it on this blog. Stay tuned.