When we posted last week’s Magic Kingdom tilt-shift video, the hope was that a few of you would enjoy the experiment. But oh my…were we surprised. Response was overwhelming.

Some Disney Parks Blog commenters said they were moved to tears. Others cheered and described it as a mini vacation. And yes, we heard those of you who asked for more. So, we immediately found the creative “eye” and champion of the project — David Roark, manager of creative photography for Disney’s Yellow Shoes Creative Group. David sat down with us and shared how he did it. 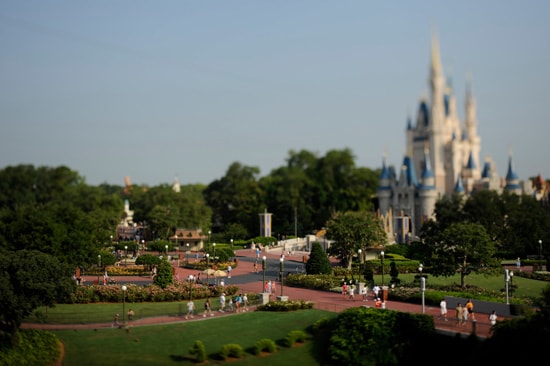 Thomas Smith: This type of project has never been attempted at Disney Parks. How’d you make it work?

David Roark: It was a lot of trial and error. My first two or three trips out of the box I was like, ‘This is not going to work.’ It’s a combination of your height on the scene and in the Magic Kingdom Park there’s just not a lot of fixed platforms where you can lock a camera off for five minutes without it moving. But there’s also lightning and consistency of exposure. We started this in the middle of summer and if you start a sequence and a little cloud comes by, you need to start it over again because the clouds darken the scene so much. So, it was very trial and error. This was on the job training for me.

TS: Was it difficult to find the perfect shots?

DR: In the case of this one, nobody really knew what we were doing. (I said) “just trust me and work with me here, this will all make sense.” TS: What lenses did you use?

DR: Nikon makes three tilt-shift lenses, they’re basically architectural lenses and we’re using them in a diametrically opposed application than what they’re built for. They’re built to actually allow you to increase the focal plane in a scene and make everything in focus. For tilt-shift, we turn them the opposite way and back tilt the focal plane so that hardly anything is in focus. And that creates that miniaturation effect.

TS: What was on your mind while putting this together?

DR: For me, it became as much a transportation story – the story of getting to the park and all the things that happen because that activity of parking your car and coming through the toll plaza. I had to think about what scenes have that kind of repetitive motion. It was a lot of fun and it’s different. For me it became a little bit of an escape.

DR: Everyone wants Wishes, but Wishes is so bright and because we shoot one frame a second, there were just too many flash frames in it. But, Epcot and Illuminations, I’ll make work. We’ll get the fireworks.