The “Princess and the Frog” doesn’t hit the big screen until December but we’re celebrating early at Disney Parks.

Beginning today and through November 22, 2009, when guests age 10 or older enter a Disneyland Resort or Walt Disney World Resort theme park and present their valid theme park ticket at select merchandise locations, they can take part in a special movie offer. 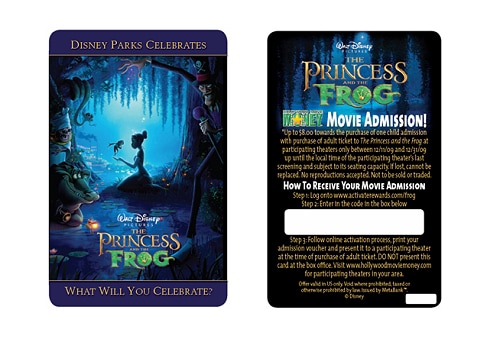 Such Guests are eligible to get a special card with details on how to get a voucher good for up to $8.00 toward the purchase of one child’s movie ticket when they purchase an adult movie ticket to see The Princess and the Frog at participating theaters from December 11 through December 31, 2009. The cards can be picked up at several locations at the Walt Disney World Resort and Disneyland Resort. Here’s the list:

Here are some details you need to know from our friends in legal: Card quantities for this promotion are limited. Limit one card per adult ticket or annual pass. Voucher toward the purchase of a child’s movie ticket to “The Princess and the Frog” is valid for use from December 11 through December 31, 2009 at participating theaters in the fifty United States and District of Columbia. Must activate the code printed on the card by registering at www.activaterewards.com/frog to obtain a voucher. Only persons 18 or older may activate the code. Parent or legal guardian must activate the code held by persons ages 10-17. Card, code and voucher may not be sold, traded, copied or replaced, or redeemed for cash. Voucher may not be transferred. Promotion not valid for complimentary Cast Member theme park tickets. Offer subject to restrictions and change without notice. Visit www.hollywoodmoviemoney.com for a list of participating theaters and further conditions and details.