If you’ve visited Disney’s California Adventure Park recently, you know the lagoon has been dry for many months as Walt Disney Imagineers install and test the newest and coolest water fountains at any Disney Park.

You can now see that the floor of Paradise Bay is a superstructure that’s nearly an acre in size and covered with a mass of metal, wiring, nozzles and gadgets. It’s all part of an intricate engineering feat to support “World of Color,” an exciting new nighttime water show that brings Disney animation to life with powerful fountains and amazing projection. 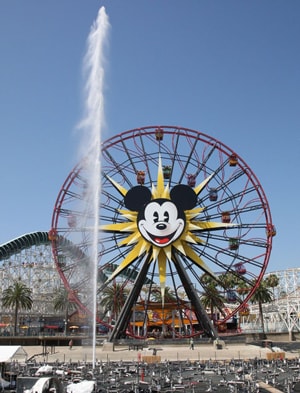 But, soon, water will be flowing back into the lagoon as part of a carefully planned environmental effort and the centerpiece of Paradise Pier will be reflecting the lights of Mickey’s Fun Wheel and California Screamin’. The lagoon will fill at a steady pace, and should be more than halfway full in about three days.

It’s actually a really interesting environmental story, and the Disneyland Resort was recently honored with the state of California’s highest environmental award for its efforts. To drain the lagoon, we worked with the Orange County Water District to send the water through its state-of-the-art Ground Water Replenishment System instead of releasing the water to the ocean through storm drains. After an extensive purification process, the water was stored in Orange County’s underground water basin and contributed to the County’s overall water reserves. Later this month, the lagoon will be filled with clean water from the aquifer.

“World of Color” makes it’s flashy splashy debut in Spring 2010. You can check out some cool renderings and video at www.DisneysCaliforniaAdventure.com. Check back here in the coming months to see the progress at Paradise Bay lagoon, the future home for “World of Color.”