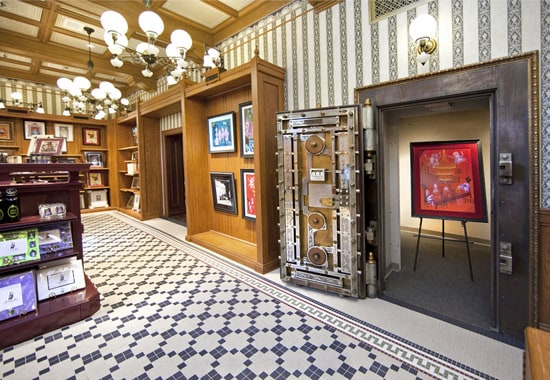 If you loved The Disney Gallery in New Orleans Square, you won’t want to miss the new one in the former Bank of Main Street, U.S.A., opening today at Disneyland Resort. 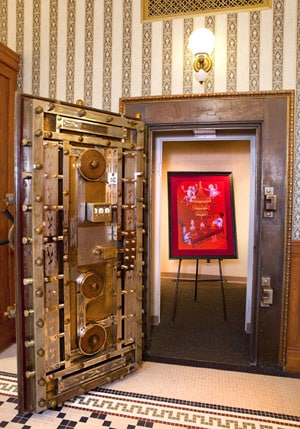 Disney’s prized artwork is now more secure than ever as special highlighted work will actually be on display in the original bank’s vault.

Irvine’s design maintains the main elements of the bank and also builds on the charming turn-of-the-century atmosphere of Main Street U.S.A. The Disney Gallery features an elegant Victorian interior with chandeliers and hand-woven carpets. 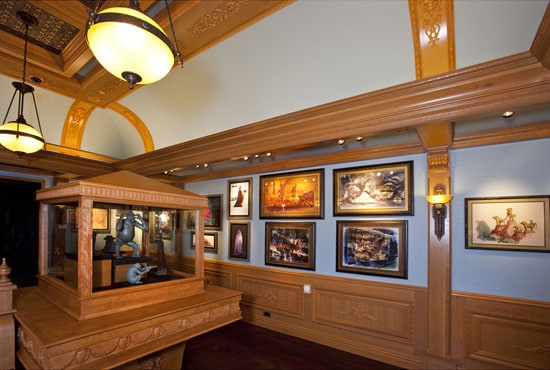 For a look at some of the original bank elements, take a look at the photo of the marble signs from the old bank teller windows and The Mosler Safe Co. vault. When asked what fans of the original Gallery will think, Irvine responds, “It will be like moving to a new home, so fans should know that. There’s always a bit of fear when there’s change, and I did not try to imitate the former Gallery because that was very New Orleans. This is very Victorian and very, very elegant. I hope fans appreciate the care and thought that has gone into the new design.”

For a look at some of the artwork available in the Gallery, check out this painting by Jim Crouch: 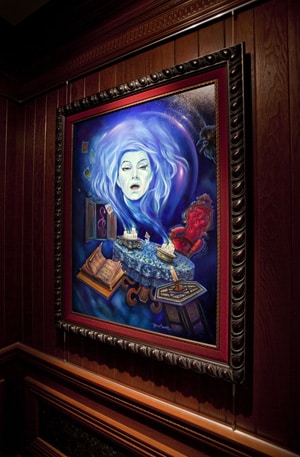 If you stop by the new Gallery, don’t miss the new “Enchanting the Classics” show that will focus on some of the parks most beloved attractions and the enhancements that have been made to keep classic Disneyland attractions fresh and surprising.

Super fans of The Disney Gallery might not want to miss these opportunities: October 10 artist signing event and October 17 signing event showcasing art that celebrates Haunted Mansion Holiday and Tim Burton’s “The Nightmare Before Christmas.”

What’s the “Art History” of The Disney Gallery?

It originally opened on July 11, 1987 in the rooms above the entrance to the Pirates of the Caribbean, which were originally designed as a private apartment for Walt Disney. Before closing on August 7, 2007, The Disney Gallery in New Orleans Square featured many popular shows, including “The Art of Disneyland” and “The Disneyland That Never Was.”

What’s Next for The Disney Gallery?

No future exhibits are confirmed, but Kim Irvine says she would love to see an exhibit of art from the Disney Parks around the world, including a display of the different castles around the world. Another idea out there is an Alice in Wonderland display.

Let us know what you think about The Disney Gallery.