Imagine never having a bad day at work. Walt Disney World Cast Member Art Lark says he hasn’t had one in 16 years — so, it’s not too surprising that guests from around the world look forward to seeing him. What’s surprising is how many there are and what they’ll do to see him. 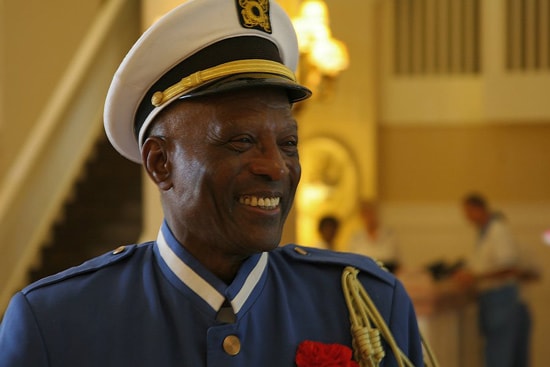 Art’s job is to make sure you have a good day when visiting Disney’s Beach Club Resort. And judging by the amount of people who are inspired to exchange online stories about him, share photos and even plan trips to say hello — he’s pretty good at what he does. The resort greeter has a growing online following that he just recently found out about.

“Art is a legend,” Walt Disney World Cast Member Lynde Dodge says. “He has kept Walt’s promise to our Guests and made memories for so many that last generations.”

The 63-year-old started at the resort’s front desk until a manager asked if he’d like to greet Guests. He said he didn’t think he’d like it but quickly realized that it was a perfect fit — like a glove, he says.

“When you’re doing something that you truly enjoy and are truly passionate about and when you’re given an opportunity — it’s easy,” Art says. “It humbles you because, to know that you’re thought of in that regard by so many people, it makes you want to make sure you don’t do anything to disappoint. I’m the one who has been blessed.”

He says his secret to success is being authentic. “People can pick up when you’re phony or pretending,” he says. “Find something you’re passionate about and do it.”

You should know that during my last visit with Art, he announced that he’s retiring. When asked what he’ll miss most, he smiled and said, “everything.”

Art is a “Disney Difference” and the first of an ongoing series featuring selected Cast Members.