A Dad is a Mom 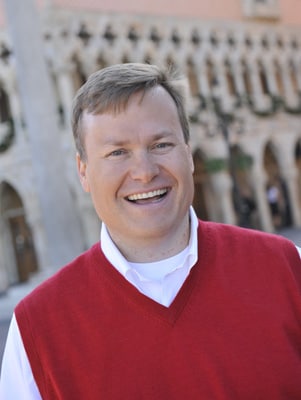 Most people are surprised to learn that you don’t have to actually be a mom to be on the Walt Disney World Moms Panel. You just have to have an incredible vast knowledge about Walt Disney World Resort, a passion for all things Disney and an incurable drive to pass on your knowledge to other people.

There were quite a few men who applied to be on the panel and many made it to the final rounds. Joining the lucky 15 ladies who joined the panel in 2009 was Doug Ingersoll of Indiana. Doug is not just your average mouse fan. He is well-traveled, having grown up around the world – from Madrid to Mexico City. However as a child, the one place the Ingersoll family always spent their summers was at Walt Disney World Resort. Doug’s knowledge and passion is so high that this year, he authored the book “The Complete Idiot’s Guide to Walt Disney World.”

“I actually found about the Walt Disney World Moms Panel last year while jogging on the treadmill. I was listening to the 2008 panel members being interviewed on a radio show. It struck me that here was a way to help even more people in a meaningful way. I just HAD to get on that panel!” he said.

Doug loves to joke that he doesn’t mind at all being surrounded by 15 women who also love The Mouse as much as he does. “It has since proven to be even more of a treat than I had anticipated. I have inherited a bunch of wonderful sisters that I simply adore. Just when I get a bit full of myself, thinking I know everything about Walt Disney World, one of them will reveal another little planning gem or some hidden magic from one of the parks that I had never known.”

All joking aside, Doug feels that helping people make their vacations magical is truly the best part of being on the panel. “While I get to field questions on theme parks, attractions, restaurants, money saving tips, and a myriad of other things, I think the questions that have touched me the most came from a pair of twin sisters, Allison and Samantha. Samantha was getting married at Walt Disney World, and Allison wanted the time to be perfect for everyone. By the time we were done, after dozens of questions or so from the two sisters, I knew all about their plans, and helped mold them. I even helped Allison prepare a special day with her Dad, a train enthusiast. I certainly felt like one of the family by the time it was all through.”

But what is it like to provide the alternative guy’s perspective? Well, it seems to come into play far less often than Doug anticipated. “I have discovered that parents the world over, whether they are a Mom, a Dad, or a Grandparent, are all pretty much alike. They want their kids to have a magical time. They want to get to be kids again too. They want every second of the trip to be perfect, because it is not just any other vacation. It is a landmark event, one that will stay in their memory for a lifetime. If I can help a family make that memory just a bit better, then I can feel like I made a difference.”