Pro Golf With A Disney Twist

Going to a PGA Tour golf tournament is all about, well, watching golf. Except when it comes to the PGA Tour event at Walt Disney World Resort. 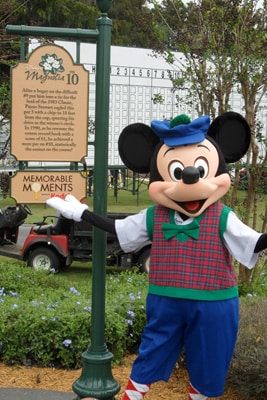 At the Children’s Miracle Network Classic at Disney’s Magnolia and Palm courses next week (Nov. 12-15), tournament officials are “cooking up” ways to make it more than just about watching golf. In addition to witnessing the drama surrounding the PGA Tour’s Fall Series finale, fans this year will be treated to a culinary experience involving elaborate dishes, unique wines and select beer from many of Walt Disney World Resort‘s most popular restaurants. Disney calls it the Wine & Dine Walk and it’s available to fans from Friday through Sunday of tournament week.

Instead of the usual sports event food, spectators who wander along the final nine holes of the Magnolia course during the Classic can sample, sip and savor signature cuisine from Disney restaurants such as The Wave (Contemporary Resort), Sanaa (Kidani Village at Disney’s Animal Kingdom Lodge) and The Turf Club Bar & Grill (Disney’s Saratoga Springs Resort & Spa). And they can do it at an affordable price (menu ranges from $3.25 to $7.50).

Not that the golf action itself won’t be appetizing enough. This is the only PGA Tour event where Tour newcomers and veterans battle to the finish to be among the lucky few who end the year ranked among the top 125 players on the Tour money list, earning them the coveted privilege of entry into virtually any Tour event in 2010. Plus, for the first time this year, one lucky player will win $1 million through the inaugural Kodak Challenge which finishes on the 17th hole on the Magnolia course.

And what better way to soak in all of that drama than on a sun-splashed Florida day as you sip a chilled glass of German white wine and nibble on a plate of seared shrimp with green curry sauce, basmati rice and naan bread from Africa?