Creating Your Own Vinylmation 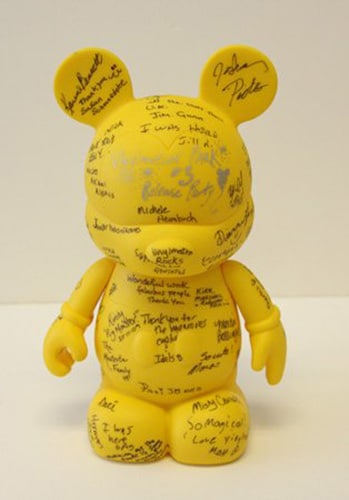 At the Vinylmation Park #3 release party in November, we introduced a 21st century Guest book – a blank, yellow 9” Vinylmation figure. Anyone who attended this party could sign the Vinylmation to proclaim “I Was There.” The response was overwhelmingly positive and the comments were awesome to read. I’m particularly torn between “Vinylmation Rocks” and “Greetings from Switzerland” as my favorites (yes, the Guests really were from Switzerland – how cool!). This new release party tradition got me thinking about all the things one can do with a blank Vinylmation. As you may recall from previous articles, Vinylmation began with blank, white Create-Your-Own figures. This month, we’re expanding the color pallet of these blank figures to include Mickey Mouse’s colors – black, red and yellow – as well as pink and purple. The addition of these colors, especially pink, was inspired by a custom figure that Debbie Damato, a fellow product developer for children’s apparel and costumes with Disney Theme Park Merchandise, made “just for fun.” 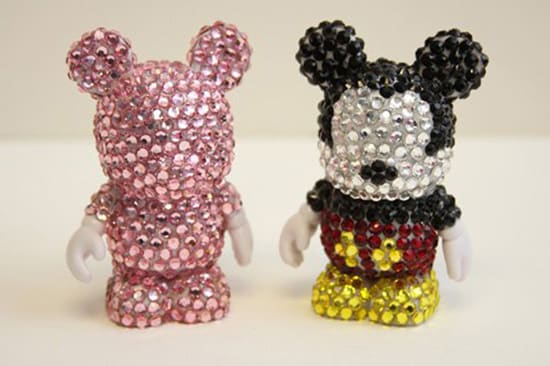 Debbie decorated these 3” Vinylmation using a toothpick to attach each jewel. She said it took about four hours to complete each figure (two hours were spent just decorating the head!). After she completed the pink jeweled one, she showed Donald Ferro, product developer for Vinylmation, and remarked that the figure would have “popped” even more if the base color was pink. He agreed and thus the blank pink Vinylmation was born. 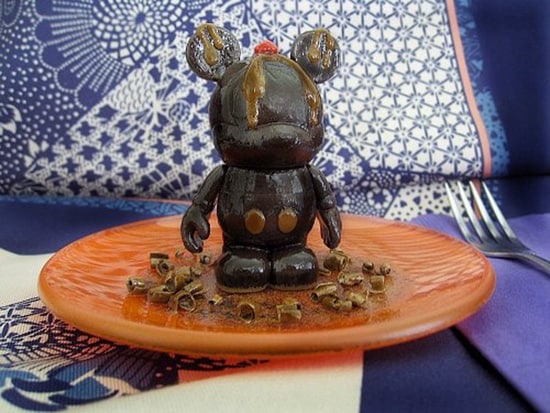 Our Disney Design Group artists have also created some unique Vinylmation figures. These one-of-a-kind custom figures have been sold at previous release parties. Quynh Kimball from Disney Design Group created the 3” figure pictured above using acrylic paint. I love the way he described it – “a sweet taste of strawberry tops the melted milk chocolate and rich, smooth dark chocolate ‘mouse.’ Savor the chocolate buttons and delicate shavings. A one-of-a-kind indulgence, without the calories.” Wow – I’m hungry.

But you don’t have to be an artist to express your creativity. Here are a couple of other ideas that may inspire you: