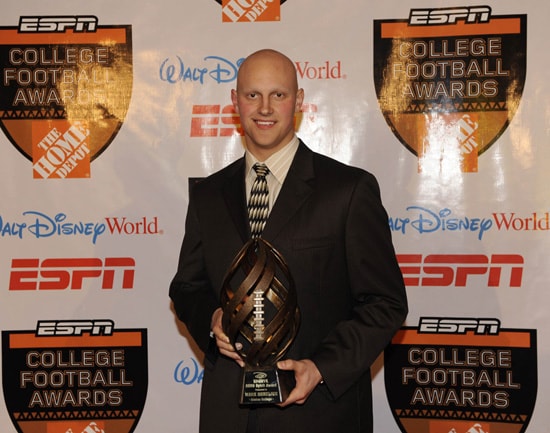 It was a glitzy and glamorous night at Walt Disney World on Thursday as the biggest stars in college football were on hand for the Home Depot ESPNU College Football Awards show. Marquee gridiron stars such as Florida’s Tim Tebow, Texas’ Colt McCoy, Alabama’s Mark Ingram and Boston College’s Mark Herzlich walked the red carpet amid a sea of fans and media before picking up some of the game’s most prestigious year-end awards.

Among all of the star players and legendary NFL pros who served as award presenters, Herzlich really stood out because he won the Disney Spirit Award that’s given annually to college football’s most inspirational player regardless of on-field achievements. Herzlich recently survived a life-threatening battle with a rare bone cancer and is determined to return to the football field for Boston College next season.

Still, despite the fierce competition for each award, these celebrity athletes found plenty of time to have a little fun, hoping on a few of the more popular attractions at Disney. Hey, when you’ve reached the pinnacle of your sport, what else are you going to do except shout: “I’m Going to Disney World!’’