Those of you who’ve been following the DisneyParks Blog have read about the first official Disney Parks mobile application – Mobile Magic – available on Verizon Wireless phones. What you may not know is that in addition to attraction wait times, FASTPASS return times and other very helpful theme park information, also included are wildlife facts and photos for many of the animals at Disney’s Animal Kingdom. On your Verizon phone, you can discover, for example, that a bull African elephant eats in one day as much as an average person eats in an entire year, that flamingos often feed with their heads upside down and their beaks under water, and that Komodo dragons can smell their next meal from 2.5 miles away. In addition to learning about the animals (including seeing their photos and finding out their whereabouts at Disney’s Animal Kingdom), all animal descriptions include steps we can take to protect wildlife and wild places. For example, all of us can help by choosing our pets wisely, practicing the 3 R’s (reduce, reuse, recycle), creating habitats for wildlife in our backyards, and supporting the Disney Worldwide Conservation Fund and local conservation organizations. 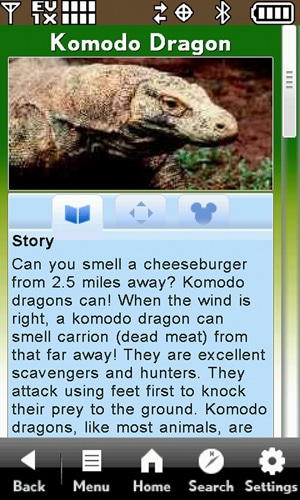 Next time you’re at Disney’s Animal Kingdom, you can take a peek at Mobile Magic on your Verizon phone and wow family and friends with your animal and conservation knowledge by sharing, for example, that the very long neck of the giraffe they’re looking at has the same number of vertebrae (seven) as they do. The only difference is that each vertebra is about one foot long!