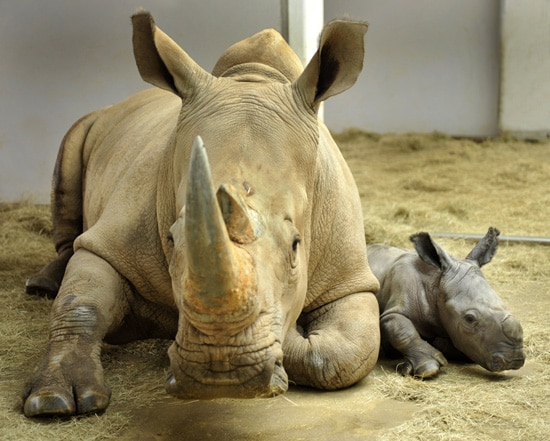 We’re beginning the week with a celebration. There’s a new member of the family at Disney’s Animal Kingdom — an adorable baby white rhino. And today, we’re sharing a first image.

Rhino births are considered special around here because at one time, the species was nearly extinct and is currently endangered. The new female baby, which has not yet been named, is the eighth white rhino born at Disney’s Animal Kingdom. Her mother, Kendi, 11, was the first. During her first weigh-in on Jan. 22, the newborn weighed 178 pounds. The calf and mother are currently off the savannah bonding at Disney’s Animal Kingdom, but will return to the herd in the coming months.

The success of the white rhino breeding program at Disney’s Animal Kingdom has allowed the team to make a direct contribution to the conservation of white rhinos in the wild. In 2006, Nande and Hasani, two rhinos born at Disney’s Animal Kingdom, traveled to Africa to join four others at Ziwa Sanctuary in Uganda, reestablishing a population that had been extinct since the 1980s. Last year, Nande gave birth to first white rhino born in Uganda in 27 years. Blog author Jackie Ogden will share more in a future post on the Disney Parks Blog.