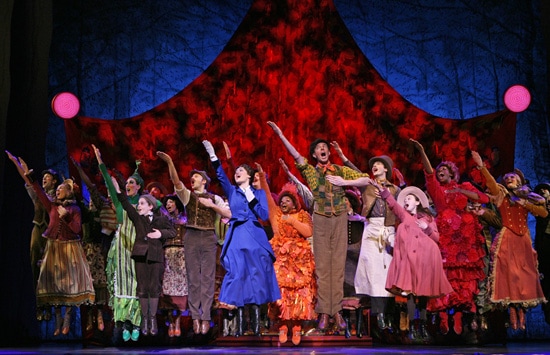 For Christmas this past year, I received tickets to see “Mary Poppins” at the Ahmanson Theatre in Los Angeles. As I think I’ve shared on the Disney Parks Blog before, I love musicals, and I really enjoyed this one. I was talking with some people in the office the weekend after I saw the show and learned that two members of the cast used to work right here at the Disneyland Resort. I did a little digging and came across a recent interview with these talented guys in a publication for Disneyland Resort cast members. I thought it was an interesting story and thought you might like it, too.

Former cast members Koh Mochizuki and Jesse Swimm are currently members of the North American Tour Cast for the musical, “Mary Poppins,” presented by Disney and Cameron Mackintosh. While they get to boast sharing the stage with original Broadway stars Ashley Brown (as Mary Poppins) and Gavin Lee (as Bert), Mochizuki and Swimm’s own performances bring that special Disney magic they knew so well when entertaining audiences “on stage” at the Disneyland Resort years ago. (As I can share from first-hand experience, their performances exude over-the-top energy in numbers like “Supercalifragilisticexpialidocious” and the rooftop chimney sweeps’ “Step in Time.”)

Koh Mochizuki plays roles in the ensemble in this third production with Disney Theatrical Productions. An English major and graduate of California State University, Fullerton, he spent most of his college years singing, dancing and acting. “I kind of stumbled into the world of performing,“ Mochizuki said. “I thought I wanted to be a cool musician, like my brother. I even took up saxophone but then joined the ‘uncool’ marching band. There, I met a fellow band member who was also a dancer and she introduced me to theater.”

At Disneyland park, his first job was performing in Fantasmic! as part of the original cast in 1992. Later, in Disney’s Main Street Electrical Parade, he was a court dancer in the Cinderella scene and eventually performed in the Christmas Fantasy Parade, among other roles.

“I worked for Disney for seven years,” Mochizuki said, “and I made some amazing friends that I still keep in contact with. I get very nostalgic remembering the days before there were two parks. My friends at Disney were like family — we all had a chemistry that bonded us; we worked together as a team to make our Guests smile … that was the best part of performing at the park.” Mochizuki’s resume also includes stints in Aida (Broadway) and Disney’s On the Record national tour, among other shows.

Jesse Swimm performs as a “swing,” a term used for company members who act as understudies for multiple roles. Swimm not only readies himself for any role where he may be needed, but is also the understudy for the male lead, Bert. The New York-born actor began his career at the Disneyland Resort in 1996 when he was hired as an Entertainment host. He went on to perform “on stage” in various roles, depicting film personalities from The Lion King, The Little Mermaid, Beauty and the Beast and various special events including a national tour with his pal, Mickey Mouse. Swimm graduated from California State University, Fullerton in Theater and has fond memories of working at the Disneyland Resort. “I really enjoyed ‘Animazement,’ a stage show at Fantasyland Theatre,” said Swimm. “I loved interacting with the Guests and portraying our Disney stories.”

If you’ve had a chance to see these actors in action (either in “Mary Poppins” or when they performed in shows at the Disneyland Resort), let us know what you think.