With Valentine’s Day just around the corner, it seemed like a good time to share a photo I recently saw for the first time. It’s from a unique anniversary party of two sweethearts: Walt and Lillian Disney. They are photographed with their daughters, Diane and Sharon, around a huge cake inside the yet-to-be-opened Golden Horseshoe on July 13, 1955, just four days before the official opening of Disneyland park. 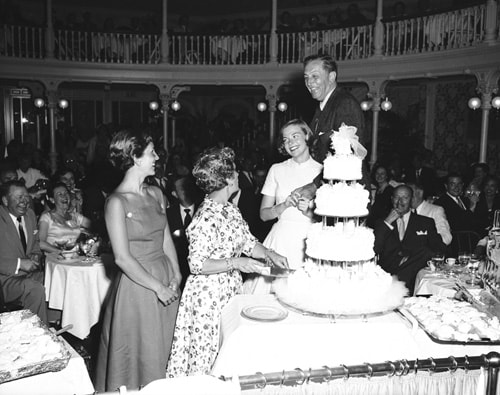 It was the ultimate celebration. Three hundred guests were invited to celebrate Walt and Lillian’s 30th wedding anniversary. Invitees included Spencer Tracy, Cary Grant and Gary Cooper. Can you imagine getting this invitation?

Hope you can make it – we especially want you and, by the way, no gifts, please – we have everything, including a grandson.

If you’ve haven’t heard the story, party guests piled into horse-drawn surreys and were taken down Main Street and into Frontierland where they boarded the Mark Twain Riverboat and sipped mint juleps. At the Golden Horseshoe Saloon (as it was called then), guests were treated to the very first, but unofficial, performance of the Golden Horseshoe Revue, created by Wally Boag, the original Pecos Bill.

Next time you visit Frontierland, step inside the Golden Horseshoe and imagine what that anniversary party might have been like nearly 55 years ago.