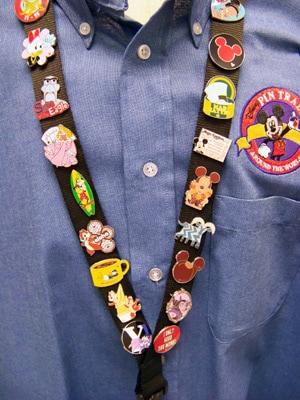 One of the more popular questions I’m often asked by Guests is, “Do you have any Hidden Mickey pins?” Guests really love trading for these pins when visiting Disney Parks. I, too, love these pins but for a much different reason than most. But first, a brief history of these highly desired pins for those who are unfamiliar.

“Lanyard Pins” were first issued to Cast Members in 2002 to use for trading with Guests. In 2006, their name was changed to “Hidden Mickey Pins” to better align with the hidden, “Mickey icon” located on the front of the pins (okay, the icon isn’t hidden but it serves as a great identifying mark). A new collection is introduced each year containing a variety of pins inspired by Disney characters, park icons and much more.

So why do I love these pins? One of my responsibilities as Project Manager is developing these pins. It is a pretty cool (and surreal) feeling knowing I have created pins that many Guests enjoy collecting and trading (I never thought I’d be doing this when I first visited Walt Disney World Resort in 1983!).

What many Guests don’t know is that throughout the years I’ve added little bits of personality to various designs. Here are a few behind the scenes stories about various pins you may have in your collection.

The HORIZNS License Plate from 2005-2006
Have I told you about my obsession with the former Epcot attraction Horizons? On the last day of operation in 1999, I rode the attraction 40 times! Who didn’t love the orange smell and the ability to choose your own ending? I always chose “Space” – I typically pushed all of the “Space” buttons before anyone else could select since majority ruled. The eye behind the word “HORIZNS” is a nod to the former Disneyland attraction Adventures Thru Inner Space. I sadly never rode it but I’m sure I would have loved it.

The FastPass Tickets
Over the years, I’ve created various FastPass tickets as Hidden Mickey pins. The times listed on these pins have special meanings such as “12:06 pm” on the Kali River Rapids pin which signifies my children’s birthday, December 6 (they were born on the same day 11 years apart!). I was born at 6:29 am, so the Star Tours pins (Star Wars fan am I) features that time. Granted, the pin says 6:29 pm as Star Tours doesn’t open that early in the morning. Finally, the Maelstrom pin features the time 4:29 pm, which is the date of my wedding anniversary, April 29 (yes, I carry that pin with me everywhere so I will never, ever forget).

For more information about Hidden Mickey pins including printable checklists to help in your trading quest, please visit http://www.DisneyPins.com and look under the “Events” section.