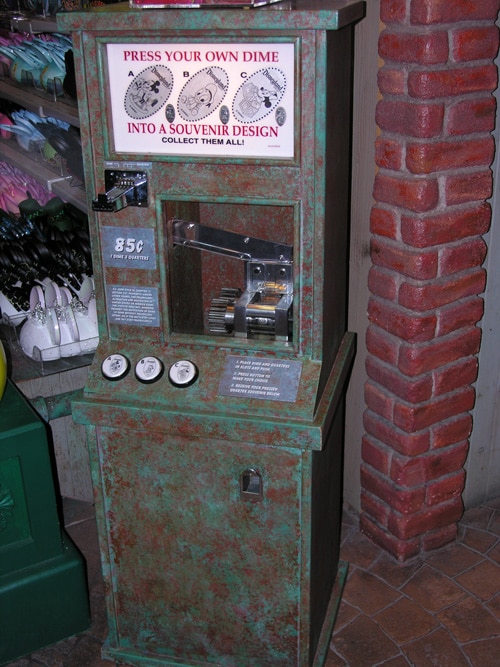 We all know the clichés…

“A penny saved is a penny earned.”

And, of course, the ever popular “penny for your thoughts.”

So in an effort not to become a cliché, here’s a fun way that you can turn your spare change into a collectible. I’m sure that you’ve seen your fair share of pressed coin machines before at theme parks, fairs and historical landmarks. Did you know that Disneyland Resort offers more than 150 different dies that can be pressed on a penny, nickel or even a quarter? Most of the pressed coin machines you’ll find are for pennies, but it’s the thrill of the hunt that makes it that much more fun to find the others. There are currently 57 coin press machines in the Resort. Have you found them all?

Tip: Most pressed coin machines can be found on Main Street, U.S.A., but there are also a few near the exits of some attractions.

Over the years, some of the most popular pressed coins have been…

The art of pressing coins dates back more than 100 years. The earliest known pressed coins are from 1818 Vienna, Austria. In the late 1800s, pressed coin souvenirs were introduced into the United States at the World’s Columbian Exposition held in Chicago, Illinois.

Did you know that the image is actually etched in reverse (i.e. like a mirror image) so that the picture pressed onto the coin will appear correctly?

A complete list of locations and coin press collectibles is available at Guest Relations/City Hall in Disneyland park as well as online at ArtofDisneyParks.com under Park Treasures.

Have you pressed a coin at the Disneyland Resort? If so, do you have a favorite?