‘Alice in Wonderland’ in Theaters, at Disneyland Park and Around the World 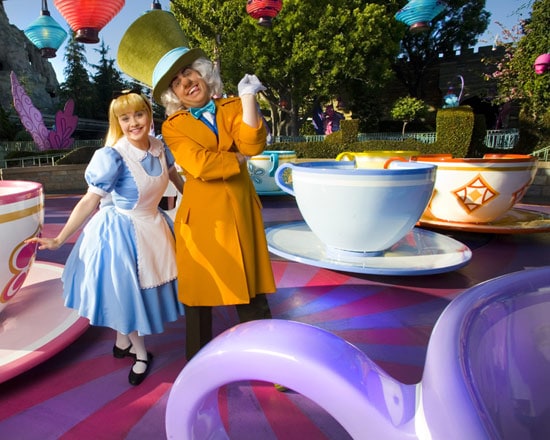 The film continues Disney’s fascination with Alice and her quirky friends, as the characters are arguably some of the most famous and adored at Disney parks around the world.

If you see the film this week and want to enter a different version of Alice’s world, look no further than the nearest Disney park.

Every Magic Kingdom Disney park has a Fantasyland-based Teacup attraction, which goes by different names. At the Disneyland and Walt Disney World Resorts the attraction is known as the Mad Tea Party. The Tokyo Disney Resort version is called Alice’s Tea Party; Disneyland Paris has Mad Hatter’s Tea Cups, and at Hong Kong Disneyland Resort, you can ride the similarly-named Mad Hatter Tea Cups. Each of the rides opened with their respective parks except for the Tokyo rendition, which opened in 1986 (the park opened in 1983).

Here at Disneyland park, the Alice in Wonderland attraction puts guests in Alice’s shoes as she follows the White Rabbit down the rabbit hole into Wonderland.

At Disneyland Paris, Alice’s Curious Labyrinth is a maze that eventually leads to the castle of the Queen of Hearts. The route has a similar shape to the body of the Cheshire Cat, and guests can see a sky view of Fantasyland at the very end.

After you see the film, why not put on your best Mad Hatter hat and go through the looking glass at Disneyland park, or any other Magic Kingdom Disney park.

Likes (0)
Share ‘Alice in Wonderland’ in Theaters, at Disneyland Park and Around the World