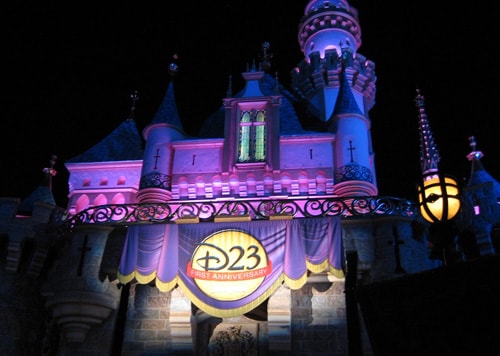 Hi everyone…D23, the Official Community for Disney Fans, celebrated its first anniversary in style this week at Disneyland Park, as more than 1,500 D23 Members and their guests took over Fantasyland for an after-hours blow out with classic attractions, beloved characters, scrumptious desserts, and some very special guests!

After Disneyland theme park closed to guests on Wednesday night, D23 Members were welcomed into the happiest land of all with a burst of pyrotechnics from Sleeping Beauty Castle. From there, guests—who had traveled from 25 different states as well as from places like New Zealand and Japan to be at the event—crossed the drawbridge to enjoy the event. As part of the festivities, D23 announced the next D23 Expo, which will be in Anaheim in 2011, as well as a new D23 Member event—Destination D: Disneyland ’55, which will take place at Disneyland Park in September of this year, and will celebrate the rich legacy of Walt’s original theme park. For more information about D23, Destination D, and the D23 Expo 2011, visit Disney.com/D23.