Tonight, the Disney Parks family is mourning the loss of a legend — Fess Parker. In his role as Davy Crockett, Fess Parker not only helped promote and open Disneyland Park but he also became a hero to many of us, including Walt Disney Company President and CEO, Robert Iger.

“Like many kids growing up in the 50’s, Davy Crockett was my first hero, and I had the coonskin cap to prove it,” according to Iger. “Fess Parker’s unforgettable, exciting and admirable performance as this American icon has remained with me all these years, as it has for his millions of fans around the world. Fess is truly a Disney Legend, as is the heroic character he portrayed, and while he will certainly be missed, he will never be forgotten.”

Fess Parker was also a childhood hero to blog author and Walt Disney World photographer Gene Duncan. Gene shared a unique photo and touching story after learning of the news and we’re sharing it with you tonight — unedited. 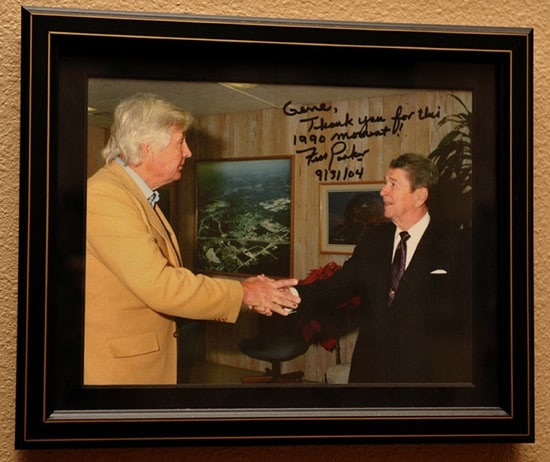 “I photographed Fess Parker at Disneyland during the 35th Anniversary press event. I photographed him at the train station, prior to the parade, mingling and shaking hands with those celebrities who had been a part of the opening of Disneyland- Milton Berle, Bob Cummings, Art Linkletter, Ronald Reagan and many more…..After the parade on Main Street, U.S.A., I spent the afternoon inside the office of Dick Nunis, President of Disney Parks, photographing various executives and others with Ronald Reagan. One of those was Fess Parker, who, for me, was a childhood hero. (I have a photo of myself wearing a coonskin cap)……

In 2004, I noted that Fess Parker and his son were to be present during the Epcot Food and Wine Festival- they owned a very successful winery inn the Santa Barbara area, and were slated to conduct a workshop at Epcot, as well as host a special dinner. I called out to Disneyland, where the 1990 negatives were archived, and asked for a couple of them to be scanned, which were then sent to me. I wondered whether Mr. Parker had ever seen the photos.

On October 1, 2004, I was assigned to photograph him, autographing wine bottles for guests. Just prior to doing that, I approached his son, introduced myself, and indicated that I had some prints for him to give his father. He waved to his dad and asked him to come over, which he did. I introduced myself, and he asked me to sit down with him in the workshop area. As he pulled the 8 x 10’s from the envelope, he became teary-eyed, and announced to me that he had never seen these images. We sat for nearly fifteen minutes, talking about all things Disney, Reagan and wine. His meaningful dialogue at the time involved his first encounter with Ronald Reagan. It seems that his very first screen audition ended the morning of, with Parker getting a call from the studio canceling his screen test, announcing that they had awarded the role ( don’t know which one ) – to Ronald Reagan.

As I photographed him later that evening, during the fantastic Fess Parker dinner, I observed a man truly bigger than life, lighting up a room when he appeared.