At first glance, it’s hard to tell you’re looking at a hospital lobby…but that’s the point. The entrance to the Walt Disney Pavilion at Florida Hospital for Children uses fantasy, imagination and adventure to create a remarkable healing environment. And today, its doors were officially opened. Take a look at the images – Walt Disney Imagineers designed the lobby with the same attention to detail they’d give to any attraction at the theme parks. Characters like Timon and Pumbaa from ‘The Lion King,” Flounder and Sebastian from “The Little Mermaid” and Rutt and Tuke from “Brother Bear” immediately catch your eye when walking in. And once inside, children can experience interactive activities, including the opportunity to fish for virtual salmon, step into a safari to touch and illuminate a cave wall, generate jungle sounds on musical step pads and swat chirping bugs that glow during a memory game. 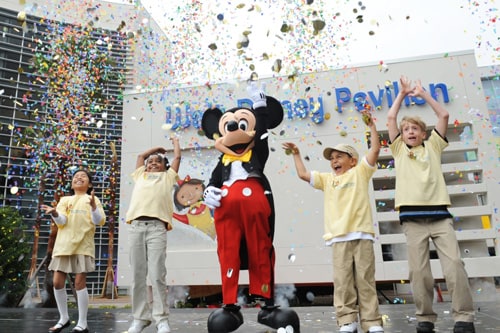 As you may know, the lobby is the first in a series of milestones for the Walt Disney Pavilion at Florida Hospital for Children. Construction and renovations are currently underway and work will continue throughout the year to complete units and patient rooms. By early 2011, the addition including seven stories and more than 200 dedicated pediatric beds, will open. It’ll feature colors, sounds and themes inspired by the lobby design. For more about the Pavilion, visit www.floridahospitalforchildren.com.