Pin Trading Outside the Parks

As most of you know, pin trading is one of the most popular interactive activities between guests and cast members. Steven Miller, a frequent contributor on the Blog, often writes about new and soon-to-be-released pins as well as the ever popular Hidden Mickey Collection, but did you know that you don’t actually have to go into the parks to pin trade?

Can you tell us about some places to pin trade outside the parks?

Janet: We have quite a few places throughout the Resort hotels and Downtown Disney where you can find guests trading. Our cast members at the front desk and Guest Services area of the hotels often wear lanyards, and you can find others at the Resort hotel stores, like the Fantasia Shop, Mickey’s in Paradise and Acorns Gifts and Goods. If you are visiting Downtown Disney, then World of Disney and Disney’s Pin Trader are definitely stops you’ll want to make. One of the main places, though, is at our monthly Pin Trading Nights at the hotels. Dates and times vary each month so check out the entire list of upcoming Pin Trading Nights on www.DisneyPins.com.

Can you give some tips to our novice pin traders on how they can get started?

Janet: As you may or may not know, we are actually celebrating the 10th anniversary of Disney Pin Trading this year, I still can’t believe it’s been that long. The easiest way to get started is to find a cast member. Look at their lanyard and find that special pin that really means something to you. I found that many guests will typically choose a pin based on a favorite character, attraction or icon. Next, take a pin that you have (whether on a lanyard or off), and ask if they’d like to trade. And just like that, you’ve made your first trade.

Tip: Kids 3-12 are the only ones allowed to trade off of teal lanyards worn by cast members. 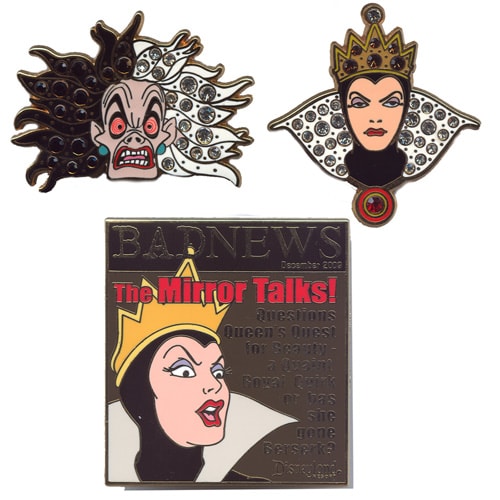 Do you have a favorite pin or pin series?

Janet: I love our Disney Villains, in particular the “Divas.” So I would have to say that the jeweled Villains pins are probably my absolute favorite. What girl, “good or bad” doesn’t love a little sparkle. Another fun collection of pins is the “Bad News” series, which were released each month last year. The pins were so comical, and the mock magazine “Bad News” pins would bring you the latest and greatest news reports from the many worlds of our infamous Disney villains.

If you’ve never tried pin trading before, it’s a great way to interact with cast members and other guests. With thousands of unique Disney pins that have been created over the years, you should be able to find favorite pins to create your very own Disney Pin Collection.