Seas Team Welcomes Rescued Manatee, Returns Another to the Wild 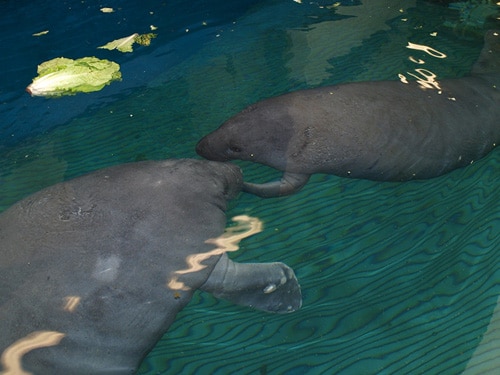 One of the many conservation efforts undertaken by Disney’s Animal Programs team members is rehabilitating and returning to the wild rescued manatees. With only 5,000 around the state, manatees are considered an endangered species in Florida. During the past few weeks, the team welcomed to The Seas with Nemo & Friends a rescued manatee, released another that they rehabilitated, and received a fantastic report on a manatee that the team returned to the wild a year ago.

This week, the team welcomed to The Seas rescued manatee, Jasper, who weighs 632 pounds and is 6-foot-8-inches long. The team expects Jasper to be released back into the wild in about a year, after he has gained weight and received medical care for cold stress. Guests can see Jasper (right in above photo) and resident manatee, Lou, when they visit Epcot. 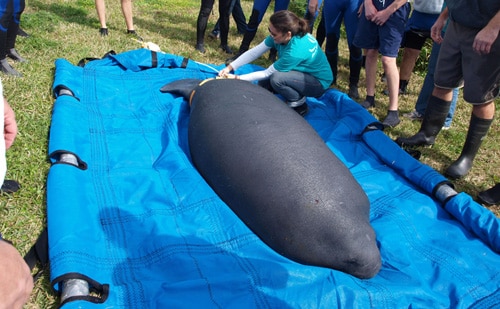 Last month, Animal Programs team members returned to its natural habitat in Brevard County another rescued manatee, Kringle. In the photo, the team is fitting Kringle with a satellite tracking belt to follow his movements. During his 14-month rehabilitation at The Seas, Kringle received treatment and therapy and weighed more than 800 pounds when he was released.

Animal Programs team members released another manatee, Bock, last year after the mammal, which had been rescued as a calf, spent six years undergoing care at The Seas. On February 27, his satellite tracking belt was removed after being used to track his movements during his first year after release. The team reports that Bock looks fantastic and has done extremely well readapting to living in the wild in the St. John’s River area.