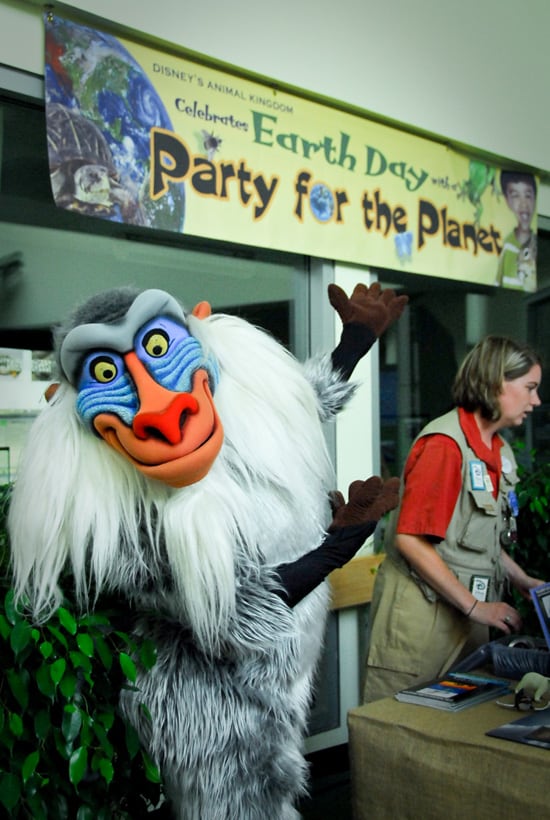 April 22 is a very special day for Disney’s Animal Kingdom. Not only is it Earth Day, but it’s also our theme park’s birthday. Could it be 12 years already? As an opening team member, I can’t believe how quickly time has flown! And how fitting it is that Disney’s Animal Kingdom opened on Earth Day. Walt Disney — whose life-long love affair with wildlife and wild places inspired animated features, documentaries and more — would have been proud.

There’s no better place to celebrate Earth Day than at Disney’s Animal Kingdom, where Guests are invited to Party for the Planet in a fun-filled day overflowing with special activities from 9 a.m.-3 p.m.

The party starts just inside the turnstiles, where Guests will be welcomed and begin their celebration. Guests can play earth-friendly games at several activity stations throughout the park, and then head to “party central” — Rafiki’s Planet Watch. It’s the perfect place for kids to get in touch with their inner amphibian (can your child jump as far as a frog?), sea turtle (what’s it like to wear a shell?) or other fascinating creature (be on the lookout for lady bugs). In celebration of the premiere on Earth Day of the new Disneynature film “Oceans,” families will learn actions they can take to protect ocean wildlife and habitats, including coral reefs.

Want to do even more to celebrate Earth Day?

Disneynature will make a contribution to The Nature Conservancy to save coral reefs in honor of every Guest who sees “Oceans” during opening week (April 22-28). And all proceeds from “Make A Wave,” an inspirational duet by Hollywood Records recording artists and Disney Channel stars Joe Jonas and Demi Lovato, will benefit environmental charities through the Disney Worldwide Conservation Fund. And this song — which is the new anthem for Disney’s Friends for Change: Project Green — also will be featured in “Oceans.” Happy Earth Day and thank you for all you do to help our amazing planet all year long!