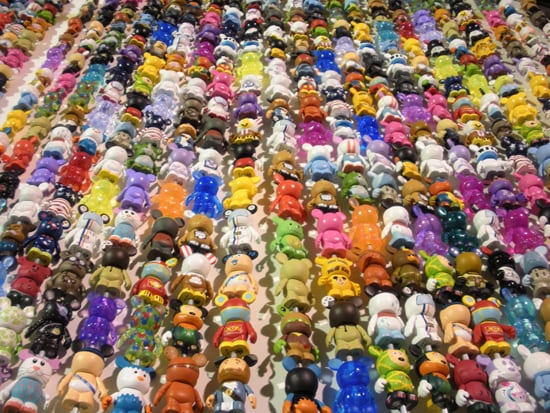 With the opening of D-Street at Downtown Disney West Side fast approaching, I thought I’d share some concepts of three-dimensional visual displays. They are however presented in 2-D format as we haven’t perfected that 3-D interface yet (uh, calling Muppet Labs!). You may begin to see these displays and others around Disney Parks soon.

For example, the image at the top of the screen featuring numerous Vinylmation 3” figures will be used in a sign at the new Vinylmation mothership location coming to Florida in April. That sign will feature 81 rods with fifteen and half figures per rod. That’s a total of 1,255 Vinylmation figures used! I can’t wait to see the finished version. When this giant, five-foot figure pictured above arrived at Disney Theme Park Merchandise, Donald Ferro, developer for Vinylmation, sent the team a message with the subject line, “Big Surprise in Showroom.” I thought cake might be waiting (why I’m not sure). After a brisk walk down the hall, I was greeted by a massive “mystery chaser” (I think we call him “Which One Did You Get?”). In the picture, he is wearing “gloves” to ensure he arrives safely at his final destination such as the Art of Disney at Epcot as pictured below. Okay, seeing him was slightly better than food (but cake would have rocked my world! Next time Donald, please). At The Star Trader in Tomorrowland at Disneyland Park, another giant “mystery chaser” will be featured in a window with additional Vinylmation cut-out figures surrounding him (see below). The cut-outs will showcase Vinylmation designs inspired by Disneyland Resort attractions. 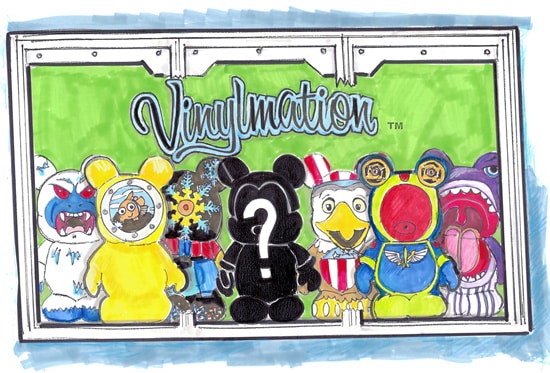 Finally, if you are staying at Disney’s Pop Century Resort, look for an eye-catching display near the Disney Resort Bus loop. This display will feature a variety of actual Vinylmation figures. 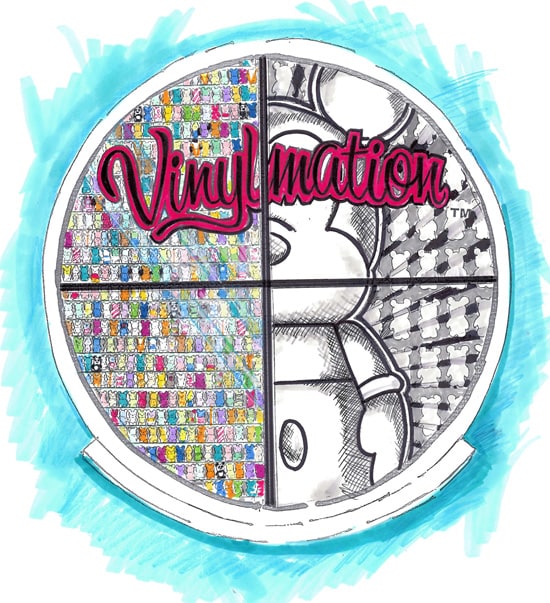 By the way, Joe Higham from Global Retail Store Development at Disney Theme Park Merchandise drew and colored these concept sketches by hand! Some of you who have attended the Disney Pin Celebration event at Epcot in previous years may recall seeing some of Joe’s handiwork.

Look for these visual displays and many others coming to a Vinylmation location near you. I personally invite you to stop by D-Street to see some amazing graphics in the windows or on the banners. There are even some hidden treasures pictured on them. But that is a different story you won’t want to miss “seeing” on the Disney Parks Blog in the future.