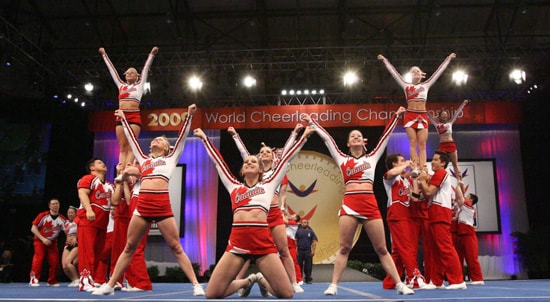 Every cheerleading squad probably thinks it’s the best in the world. Well, this weekend at Walt Disney World, they get their chance to prove it.

Cheerleading squads literally from around the world are arriving at ESPN Wide World of Sports Complex at Disney for the 2010 International Cheer Union World Championships, which is akin to the Olympics of cheerleading. Squads from China, Finland, Mexico, Thailand, etc., as well as squads from across the U.S., are jumping, bouncing, screaming and tumbling for the chance to be crowned World Champion this Friday, Saturday and Sunday. It’s a huge deal. China, for instance, is expected to bring a delegation of 300 members.

In all, there are expected to be more than 2,000 cheerleaders making up more than 150 squads from 45 or more countries. Teams will compete in various groups, plus there’ll be a competition between each country’s national teams for the world titles.

The competition is fierce, but the event also serves as a great opportunity for the mingling of various cultures in an Olympic village type of setting. Friendships are forged, cultural artifacts are exchanged and memories are created.

The event is open to the public. To purchase tickets, go to the ESPN Wide World of Sports Complex box office.