A Disney Pin Salute… Looking Back at Memorial Day 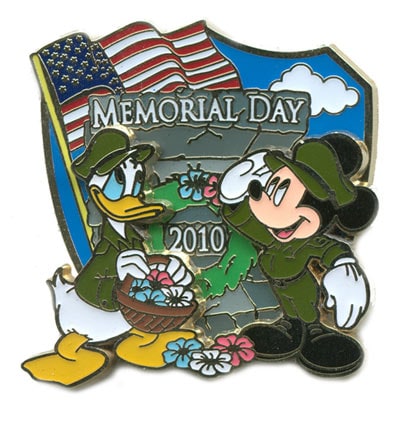 Commemorative pins have been a part of Disney Pin Trading history for years. We have created a variety of pins celebrating everything from Halloween to Groundhog Day to even Arbor Day (yes, Arbor Day – we’ve since stopped celebrating that holiday with a pin). There are, however, one set of pins, that hold special meaning to me – the Memorial Day pins. I dug deep in the Disney Pin Vault to give you a brief retrospective at some of the pins we’ve created recognizing this patriotic holiday.

While the holiday was officially established in the late 1960s, we didn’t release the first Memorial Day pin until 2001. The pin featured Donald Duck and had an awesome dog tag dangle. It was followed up by two pins in 2002, including the aviator Mickey pin (center above) that was designed by long time Disney Design Group Artist Randy Noble.

The holiday itself is a time to remember those women and men who served (and paid the ultimate price) while in service of the military. It is typically held on the last Monday in May (though the date has shifted around throughout the years). Some of the Memorial Day pins we’ve released have featured characters saluting; while other pins are red, white and blue all over (I think Walt Disney said something similar to that once).

The White Rabbit pin was released in 2003 at Disneyland Resort and featured a symbolic poppy flower (a traditional flower displayed on Memorial Day). The poppy flower would not return to a pin until 2010. The other two pins pictured above – the ribbon dangle pins – would later inspire a whole collection of open edition pins. The ribbon dangle element is still one of my favorite embellishments for a Disney pin.

So why do the Memorial Day pins have special meaning to me? My father, father-in-law, grandfather and my wife’s grandfather all served in the military. One of my best friends from grade school still serves in the military today. I often think about what they have done in service and for those friends they lost along the way. So this Memorial Day, I hope you will join me in stopping to say “thank you” to anyone who has ever served. I’ll start by saying, “Thanks, Dad.”