A Moment With Art

We have many photos of our friend, the late Art Linkletter at Disneyland Park throughout the years, but I wanted to share my personal favorite, and one of the very first images we released from our 50th anniversary celebration in 2005.

We had somehow located one of the television cameras used in the opening day telecast of Disneyland Park on July 17, 1955 and we arranged for Art to be interviewed live on television, in black and white, using the very same (now antique) camera we had used 50 years earlier.

During a break, I asked him if he’d like to try on one of our gold Mickey ear hats, and without hesitating he put it on. 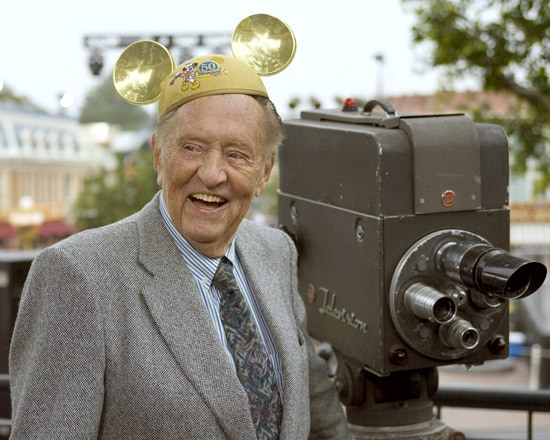 As I think you can see from this photo, Art was a big kid at heart and I love the spark of playful mischief in his eyes. Maybe it was because July 17 was also Art’s birthday.

I’ll always remember something he said during our 50th when he shared a story about a man at Disneyland Park who asked him, “Isn’t it a shame that Walt Disney couldn’t be here to see this?” and Art said, “He did see this, that’s why it’s here.”

Destinations: A Moment With Art