Autopia? Disney’s FastPass? What’s Your Favorite Park Addition or Memory Between 1996 and 2000? 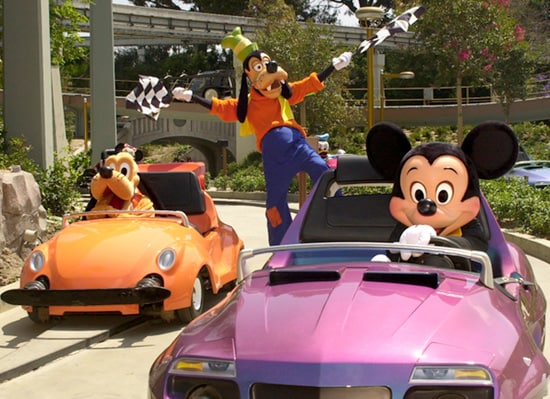 This week I’m featuring Autopia as the most memorable attraction to open in this five-year period. I have several pictures of myself “driving” in Disneyland park over the years, and while I wasn’t at the Park in 2000 for this re-opening, this attraction certainly evokes some strong memories for me.

Counting backwards, here’s a look at what happened from 2000 to 1996 to help you pick your favorite:

2000 – A brand new parade – 45 Years of Magic Parade – and a dazzling new fireworks spectacular – Believe…There’s Magic in the Stars – debuted this year. The only original Tomorrowland attraction left from park opening, Autopia, is reimagined. Combining the old Fantasyland and Tomorrowland attractions, young drivers now cruised along a modern highway through scenic forests and past shimmering waters.

1999 – Disney’s FastPass service makes its official debut with “it’s a small world” holiday in November. The Plaza Gardens undergoes a revitalization effort with a new canopy and stage. New faces can be seen throughout the park, such as Radio Disney DJs Just Plain Mark and Zippy, who begin broadcasting live from underneath the Observatron. Tarzan moves into a tree house in Adventureland.

1998 – Three new attractions transformed Tomorrowland this year, including the Astro Orbitor, “Honey I Shrunk the Audience” and Rocket Rods. Over in Fantasyland, Fantasyland Theatre received an entirely new look with a new roof and a whole new show – Anamazement – starring some of Disney’s famous animated characters.

1997 – The Hercules Victory Parade traveled through the park for the first time, celebrating Disney’s newest hero. Light Magic opened, and Main Street, U.S.A., got a lot more tasty with new locations for the Carnation Café, Blue Ribbon Bakery and Gibson Girl Ice Cream Parlor. On Refreshment Corner, a window was dedicated to honor Bob Penfield, the last original cast member to retire. Bob was a part of “Club 55,” which was the term for those who were on the job the day Disneyland park opened.

1996 – A record number of guests turned out for Main Street Electrical Parade before the show dimmed the lights. The new stars from Disney•Pixar’s hit “Toy Story” opened up the Toy Story Funhouse over in Tomorrowland. In Frontierland another guest experience premiered at Big Thunder Ranch. The Hunchback of Notre Dame Festival of Fools completely immersed the audience in an exciting song, dance and fun-filled extravaganza.

So, what’s your favorite event or memory? Is there anything that happened in these years that you forgot about or is news to you?

Destinations: Autopia? Disney’s FastPass? What’s Your Favorite Park Addition or Memory Between 1996 and 2000?