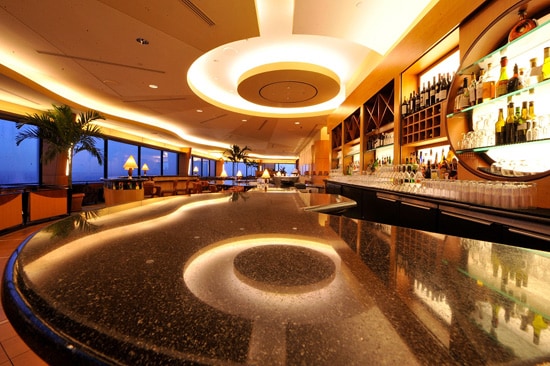 Has it really been 15 years since one of Disney’s most talked-about restaurants opened at the top of Disney’s Contemporary Resort? And we bet plenty of you have a favorite California Grill dish (or story).

Our menu favorite? Yoshie’s sushi, on the menu since the restaurant opened May 15, 1995. Or maybe the grilled pork tenderloin with goat cheese, and the crisp flatbreads…we figure if they take those away, there will be a mutiny on the 15th floor.

Chef Brian Piasecki has been running the CalGrill kitchen since January 2009, focusing on seasonal (ah, those heirloom tomatoes) and local products when possible, and coloring outside the box with dishes such as seared bison and a divine lobster salad with yuzu mayo. But we know that it’s the dazzling location high atop the Contemporary with a bird’s eye view of the Magic Kingdom fireworks that really takes the experience over the top. And manager and sommelier Bridget Sherren showcases a stellar wine list and runs a top-notch team in the dining room.

When you can’t snag a reservation, ask for a seat at the counter in front of the kitchen where you can watch the sushi chef or the action in the on-stage kitchen as dishes come together with panache and precision.

Bartender Ray came up with a cocktail just for the 15th, and named it the “Golden Gate” for one of California’s most enduring symbols. If you can’t make it to the top for California Grill’s version, you can shake it up at home. And make a toast to 15 more years for the California Grill!