Have you ever wondered where our Disney artists get their inspiration? How they got started? Or how they go about creating such beautiful masterpieces? Well, wonder no more! For the next several months, I’ll be taking you behind the magic by introducing some of our talented Walt Disney Imagineers and Disney inspired artists and paying tribute to them in a special Artist Corner series titled, “The Art Of.”

Our first artist in “The Art Of” series is former Walt Disney Imagineer and Disney-inspired artist Maggie Parr. Maggie has created artwork and designs for Disney theme parks around the world. Renowned for her Renaissance-inspired portraits, her classics series honors Disney characters and also stands alone as fine art. 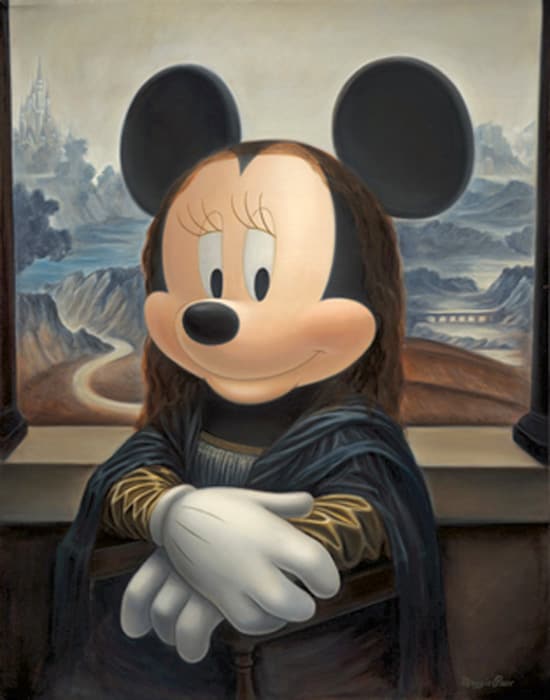 Michelle: Maggie, your work continues to provide a sense of enchantment to our guests. Your ability to capture some of our most notable Disney characters in many film-related scenes and scenarios is just part of the charm and magic that makes them so special. Some of your most recognized pieces have actually had a type of “Renaissance” inspiration. What made you choose to depict the characters in that style?

Maggie: I originally got the idea when Imagineering hired me to paint Disney characters in famous artworks for Tokyo Disney Sea. I really enjoyed imitating classic paintings. But it was also an interesting challenge to figure out subtleties of the characters: how they’d look in costumes, what expressions they’d have, how they’d look rendered in different mediums and techniques. I realized that Goofy, and all of the characters, have their own psychology. In fact, when I painted them, they came alive on the canvas, and I began to appreciate and understand the Disney characters in a whole new way while inserting lighthearted American humor into serious European history. Mickey and Minnie are beloved to the American imagination – so it made sense to paint them as “Queen Minnie” and “King Mickey” after famous royal portraits. It feels fun and irreverent to frame Goofy and Donald as English noblemen in the 1700s. And of course, portraying Minnie as the Mona Lisa is the ultimate parody.

Tip: Several of Maggie’s “Renaissance” inspired pieces, including “Minnie Lisa” and “Duck With A Pearl Earring,” will be available on the Disney Cruise Line in the months ahead.

Michelle: Two of your upcoming pieces will surely capture the imagination of Disney enthusiasts and Railroad historians everywhere. Can you give us some highlights and insights on these pieces and why you chose these subjects to commemorate the 55th Anniversary of Disneyland park?

Maggie: When I got the invitation to develop artwork for the 55th Anniversary, I jumped at the chance to portray scenes from the opening year. I grew up in Ohio, so I didn’t get to visit Disneyland park until my early 20s; but I can feel its history every time I walk through the park. There’s a certain magic that’s unique to Disneyland. It’s something I try to capture in my paintings. And because it’s a place that was born in the imagination, it seems natural to picture the characters walking around as if they secretly live there. That’s why I painted Sleeping Beauty in front of her castle, and Donald as the engineer, and Mickey as the fireman of the train. To me, they’re the living force that animates these places.

I decided to paint the castle because it’s so iconic; but I was surprised to learn that it was originally painted white. I left Aurora’s dress pink (instead of blue) to honor the current coloration of the castle. I also wanted to paint one of the trains because they’re just so fun. I originally considered portraying the No. 1 engine, but after learning that the No. 2 was Walt’s favorite, I had to paint that one. I consulted Jeff Remy – a train enthusiast and one of the engineers on the Disneyland Railroad – and he generously provided advice on the mechanical and historical details. Of course my pieces are never completely realistic – I add characters and fantastic details to make it more magical – but I try to portray the real-life setting as accurately as possible. Maggie’s newest pieces will be available in late May, as she will be one of several artists featured as part of a Disneyland park 55th Anniversary exhibit in The Disney Gallery. Keep checking the blog for the latest details on the new exhibit and more.

Next month’s “The Art of” series will feature miniaturist Robert Olszewski.