You can “be the first to be among the last” passengers aboard Star Tours before the famed attraction “powers down” to make way for its new “reimagining” in 2011. 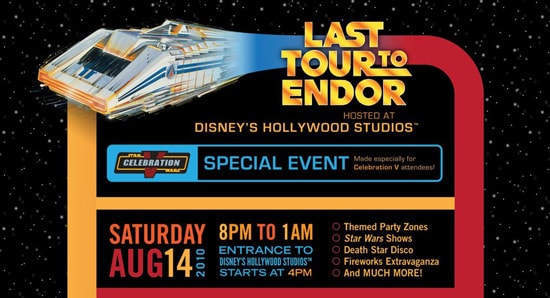 Scheduled for August 14 from 8:00 p.m.– 1:00 a.m., the “Last Tour to Endor” party will feature intergalactic party zones, Star Wars shows, a “Death Star Disco” and a Star Wars-themed fireworks spectacular. Star Wars fans of all ages will have the chance to experience the power of the Force and the magic of Disney combining for one special night. And it’s all designed for guests attending Star Wars Celebration V.

It’ll be the place to be for all of the Sith, Bith, Twi’leks, Rodians and their best friends to celebrate the Star Wars saga in one of the most magical places on earth. For more information about Star Wars Celebration V and to purchase tickets, check out www.starwarscelebration.com/Disney. So, who is coming?