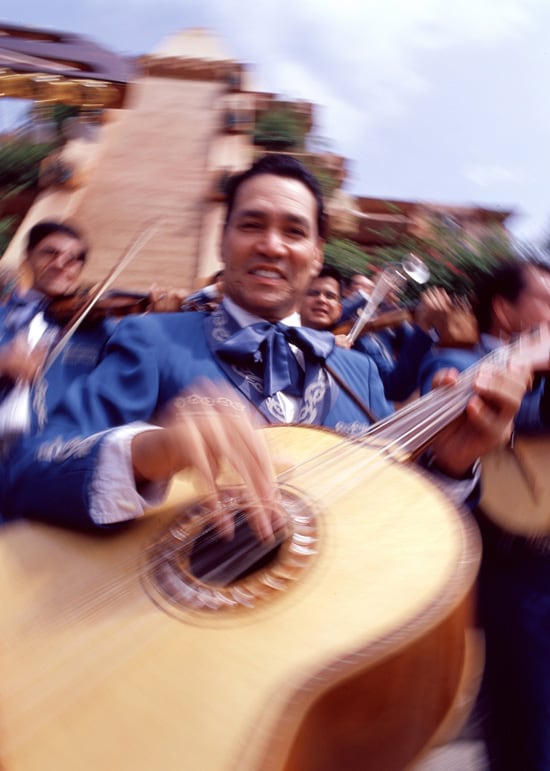 One of my favorite photographic subjects is live entertainment – and the talented performers who create it. I have been a fan of this classy group for thirty-five years, and they are soon approaching their 40th anniversary!

I want to share a photo I made in 2004 of Mariachi Cobre during a musical performance on the Epcot promenade in front of the Mexico Pavilion. This image captures a tiny bit of the high energy and dramatic presence of a truly spectacular group of musicians, and features leader Randy Carrillo, shown here plucking a 6-string Guitarron, literally “large” Mexican guitar. The unique instruments’ design dates from the 16th century, and was the inspiration for development of the first modern acoustic base guitar.

Co-founders Randy Carrillo, his brother Stephen and friend Mack Ruiz founded the group in 1971, and, along with many other gifted musicians, have brought smiles to untold numbers of enthusiastic audiences over the years, performing regularly at Epcot since 1982. Mariachi Cobre plays concerts and festivals around the world, and they have been featured alongside symphony orchestras from throughout the U.S. and Mexico.

To all of you who enjoy really good live entertainment with a cultural flair, I cannot offer a more enthusiastic recommendation. Fantastico!