Mickey’s Toontown? Indiana Jones Adventure? Fantasmic!? What Was Your Favorite New Attraction or Memory Between 1991 and 1995?

This latest post in a series counting down the weeks to the 55th anniversary focuses on the highlights between 1991 and 1995. These were huge years. A whole new land was added to Disneyland park, a gigantic attraction debuted in Adventureland, and one of the most beloved nighttime spectaculars premiered on the Rivers of America.

My favorite? While arguably not the biggest new addition to the Disneyland Resort in this five-year period, Fantasmic! is probably my favorite. The show has an epic feel to it. Fantasmic! has a rich story, includes more than 100 cast and crew members, and is one of the best shows to see all of my favorite characters in one place. The photo below is from the opening event on May 1992. 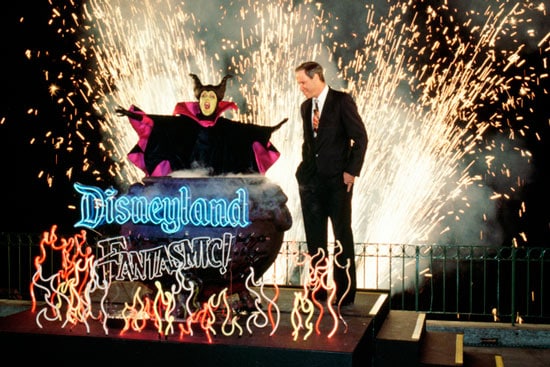 In case you’ve forgotten, here’s a look back at this half decade, jam-packed with new attractions and shows:

1995 – Indiana Jones Adventure (TM), the thrilling off-road journey through an ancient temple, blazed its way to Disneyland park. On July 17, a time capsule was buried in the Sleeping Beauty Castle forecourt containing items that would not be revealed until the park’s 80th anniversary. The dance club Videopolis was transformed into Fantasyland Theatre, featuring the all-new stage show “The Spirit of Pocahontas.” The Disneyland Resort expanded to include the Disneyland Hotel’s next-door neighbor, the Pan Pacific Hotel, which was transformed into the Disneyland Pacific Hotel (and later Disney’s Paradise Pier Hotel).

1994 – Roger Rabbit’s Car Toon Spin welcomed its first fares on the one-year anniversary of Mickey’s Toontown. This innovative dark ride featured vehicles that could be rotated in any direction or speed. One of the biggest parades in Disneyland park history debuted, as “The Lion King Celebration” showcased unique Audio-Animatronics and larger-than-life puppets along with more than 100 live performers. The park said goodbye to a longtime favorite, as the Skyway attraction connecting Fantasyland and Tomorrowland closed after 38 years of operation. 1994 also brought the spring break which saw Disneyland park go Pog Wild and Rollerblade Crazy.

1993 – The toons finally received their very own home in Mickey’s Toontown, the first all-new land added to Disneyland park in over 20 years. Featuring a gag-filled downtown inspired by the 1988 film Who Framed Roger Rabbit, the cartoon-like design was influenced by the personalities of the characters living there, with Donald taking up residence in a boat while Chip and Dale inhabited an acorn tree. With Aladdin hitting theatres in the summer, a Royal Caravan parade made its way to Main Street, U.S.A., while the Tahitian Terrace in Adventureland was replaced by a new restaurant, Aladdin’s Oasis. As Mickey Mouse celebrated his 65th birthday, the “Partners” statue featuring Walt Disney that sits in Disneyland park’s Central Plaza was also dedicated.

1992 – Mickey Mouse ignited the night for the first time with Fantasmic!, an epic battle between good and evil on the Rivers of America featuring water, pyrotechnic and laser effects. Though the show begins its 19th year this summer, it wasn’t the only entertainment of note in 1992. Coinciding with the theatrical release, a live Beauty and the Beast stage show debuted on the Videopolis stage, which ran for several years and eventually inspired the Broadway smash. Goofy also celebrated his sixtieth birthday with the larger than life parade, “The World According to Goofy,“ and opened his first restaurant as Goofy’s Kitchen debuted at the Disneyland Hotel. The park’s biggest special event was the private 60th birthday party of actress Elizabeth Taylor, featuring a performance of “Happy Birthday” led by Barry Manilow.

1991 – As the Persian Gulf War came to an end, Disneyland park honored thousands of veterans returning home from the region with a daily cavalcade from April 17 to June 17. The park also helped raise money for the U.S. Olympic Committee with Olympic Salutes, a five-mile cast member torch relay in June leading to Sleeping Beauty Castle. Elsewhere in the park, the Blue Ribbon Bakery opened its doors on Main Street, U.S.A., and those with fond memories of watching Darkwing Duck and Chip ‘n Dale Rescue Rangers after school remember the thrill of meeting their favorite stars live at Disney Afternoon Avenue. This temporary Fantasyland attraction featured the TaleSpin stage show “Plane Crazy” at Videopolis, plus redressed rides including the Rescue Rangers Raceway (Fantasyland Autopia) and the Motor Boat Cruise to Gummi Glen (of Gummi Bears fame).

What is your favorite attraction or memory between 1991 and 1995?

Likes (1)
Share Mickey’s Toontown? Indiana Jones Adventure? Fantasmic!? What Was Your Favorite New Attraction or Memory Between 1991 and 1995?

Destinations: Mickey’s Toontown? Indiana Jones Adventure? Fantasmic!? What Was Your Favorite New Attraction or Memory Between 1991 and 1995?