UPDATE – May 24: Disney’s Animal Programs has landed on Luna as the name for the baby elephant born late last Thursday. With Latin roots, Luna means moon in multiple languages. Disney’s animal care team wanted a name that best suited the female calf’s shining personality as the brightest light among the herd.

Weighing 288 pounds at birth, Luna is the fifth elephant born at Disney’s Animal Kingdom. She joins the herd of thirteen, which now includes five males and eight females.

Luna’s mother Donna is reportedly doing well after gaining more than 400 pounds during the 22-month gestation. Animal experts describe her as a model mother, taking excellent care of her newborn calf. Mother and child remain backstage while the calf becomes acclimated to other herd mates. 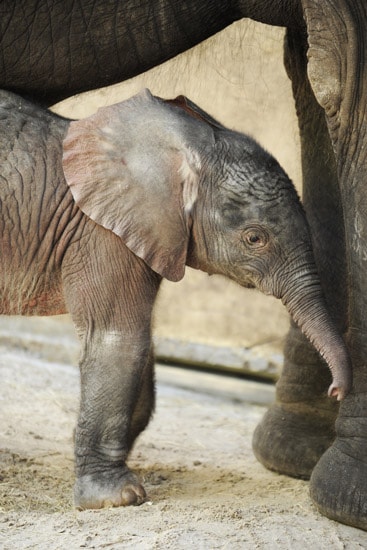 I’m thrilled to share with you the fantastic news that we have a new baby elephant at Disney’s Animal Kingdom. Our 22-year-old elephant Donna gave birth to a 288-pound female calf late last night after a 22-month gestation. Right now, baby and mom are in their backstage home, but in several weeks we expect them to join the rest of the elephant herd on the Kilimanjaro Safaris.

The new baby (no name yet!) is the second calf for Donna, who gave birth to a female calf, Nadirah, in 2005. This birth raises the number of elephants in the Disney’s Animal Kingdom herd to thirteen, including five males and eight females. 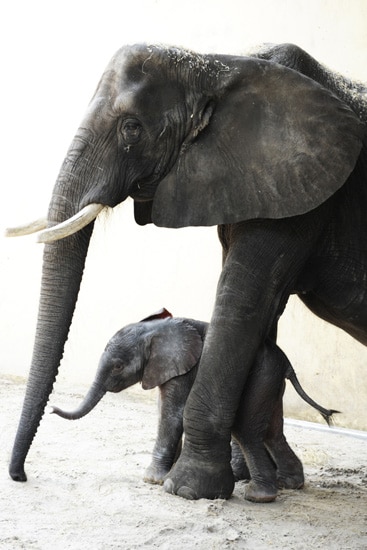 Elephant births are among the most amazing and complicated processes in the animal kingdom. Our animal care team has worked with Donna attentively throughout the course of her pregnancy. At this point, we’re optimistic for the calf’s likelihood of survival and are thrilled that both Donna and her calf are doing well.

Donna became pregnant through artificial insemination in July 2008 and received extensive pre-natal care throughout her pregnancy. In addition to regular ultrasounds, veterinarians and elephant managers monitored her hormone levels on a daily basis to help them determine when she would give birth. Labor appeared imminent last night and the animal care team stayed with her to provide round-the-clock care until the female calf was born around 11:30 p.m.

I am very proud to say that the Disney’s Animal Programs team has been at the forefront of efforts to better understand and care for endangered elephants. Disney’s Animal Kingdom is part of a breeding program coordinated by the Association of Zoos and Aquariums that is focused on sustaining the elephant population in North America. AZA’s Elephant Species Survival Plan has called for a five-fold increase in African elephant reproduction efforts – using both natural and artificial breeding methods – in order to create a self-sustaining elephant population among North American zoos and wildlife centers.

And our team and the Disney company also support elephant conservation in the wild. For example, the Disney Worldwide Conservation Fund and the Disney Foundation have directed over $1 million to projects in 20 countries to help protect and conserve elephants.

Elephant fun fact: An elephant calf learns how and what to eat by watching the older elephants.