Talk about creating magical memories! The premiere of ‘World of Color‘ last night was one of those great Disney moments that I will remember for a lifetime. It was a thrill to see the look on the faces of our Guests (including my wife and boys) as Paradise Bay was transformed into a rainbow symphony of our best Disney music, animation and stunning water effects. It’s a show unlike any other, and it represents the finest of what makes Disney, Disney. 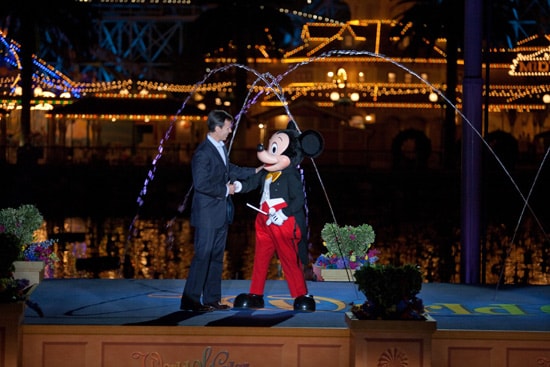 Of course, it takes a whole lot to create a show as big as ‘World of Color.’ This spectacular is the result of a great collaborative effort that has drawn on every part of The Walt Disney Company. Making magic requires teamwork, and I’m honored to be working with such talented teammates.

‘World of Color’ is the quintessential Disney celebration-one that builds on Walt’s legacy of using creativity, technology and innovation to bring our most beloved characters and stories to life in a whole new way. And I think it’s a satisfying first taste of what’s to come at Disney California Adventure and at our parks and resorts around the world. We’ve got a pretty amazing lineup of new experiences opening over the next few years: Our “Little Mermaid” attraction and “Cars Land” at Disney California Adventure park; two new Disney cruise ships; a new stand-alone resort in Hawaii; and major expansions of Hong Kong Disneyland and Fantasyland at the Magic Kingdom in Walt Disney World.

We’ll be giving you updates here on the Disney Parks blog as these projects progress, so stay tuned. And enjoy ‘World of Color.’