Building a Home for Orphaned Gorillas

Hi everyone…as I write this in my office not far from our gorilla habitat at Disney’s Animal Kingdom, two of my Disney’s Animal Programs colleagues, animal care experts Joe Christman and Sam Berner, are in the Democratic Republic of Congo helping to build the first-ever rehabilitation facility in Africa for rescued orphan eastern gorillas. That’s what makes working at Disney’s Animal Kingdom so wonderful. Every day we get to share with park Guests what they can do to help gorillas, but we also are helping gorillas in their native habitat – and the people who live in communities nearby. 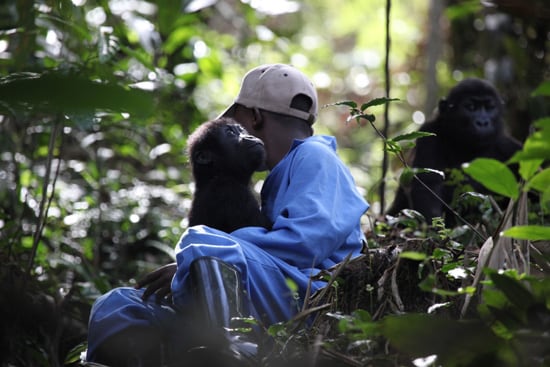 Construction on GRACE (Gorilla Rehabilitation and Conservation Education Center), which was initiated by the Dian Fossey Gorilla Fund International with advice on design and systems provided by team members from Disney’s Animal Programs and the Pan African Sanctuary Alliance (PASA), is still under way. The Disney Worldwide Conservation Fund is providing funding toward initial operating expenses for the facility. Even as construction continues, however, the first four orphaned eastern gorillas rescued from poachers in Rwanda and Congo already have arrived. In the photo, courtesy of Jessica Ellis, the youngest orphan, Ndjingala, settles in on her first day at GRACE. While efforts to protect the gorillas, an endangered species, and their natural habitat continue to increase in east Africa, the number of orphaned gorillas also has increased in recent years. In the past, most illegally trafficked gorillas died before they could receive proper care.

The GRACE center is near the Tayna Nature Reserve so the orphan gorillas will have a place to grow and learn to be gorillas, experience the forest and develop the social and survival skills they will need when they are released into the wild. They will live at GRACE until they are adolescents, a time when wild gorillas start moving between social groups.

The construction of GRACE also is bringing jobs into the area. The local people are being employed for construction, maintenance of the facility, care takers for the gorillas and ecoguards for the forest, among other employment opportunities. I spent several weeks at GRACE last fall to help with the planning and will be returning in July, to help with the arrival of the next 6 orphan gorillas. Being there is very humbling while at the same time such an honor – to be part of the lives of the people there and help them in their desire to conserve wildlife and wild places – their natural heritage. It is amazing the things the people in the area will do for conservation–they live at the poverty level yet will put their life on the line for the gorillas. I am very proud that Disney’s Animal Programs and the Disney Worldwide Conservation Fund can help.