At Walt Disney World Resort, we have a tradition of community service that is part of our culture. Through the Disney VoluntEARS program, Cast Members can contribute their time and expertise toward making a difference in Central Florida.

Disney annually recognizes these efforts with VoluntEAR of the Year and VoluntEAR Team of the Year awards, which come with $2,500 cash donations to the charity of the recipients’ choice. Top standouts for 2010 will be named later today. 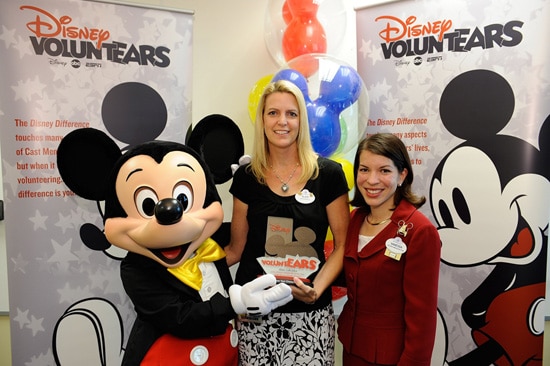 But before we look ahead, it’s worth looking back at 2009 VoluntEAR of the Year Alais Salvador, who won honors for providing more than 2,500 meals for the hungry and creating a Relay for Life team, which raised more than $56,000 for the American Cancer Society.

Within a week of being named VoluntEAR of the Year, Alais was diagnosed with a brain tumor. She underwent two surgeries and – for a short time – lost her ability to speak. As soon as she could, Alais began to volunteer again because “it’s a part of who I am and it just made me feel really good.”

After almost a year’s worth of speech and occupational therapy, Alais has almost made a full recovery. She’s active at work, in the community and as a mom. She credits volunteering to aiding in her recovery and strives to reach her 2008 peak of 607 service hours. Currently, Alais volunteers with the American Cancer Society, Bread of Life Ministries, Coalition for the Homeless, March of Dimes and helps at her church and children’s school.

Alais is a true inspiration. She deserves a standing ovation in my book and the best of health so she can continue with her civic-minded efforts.