Couple Knows it Really is A Small (Disney) World After All 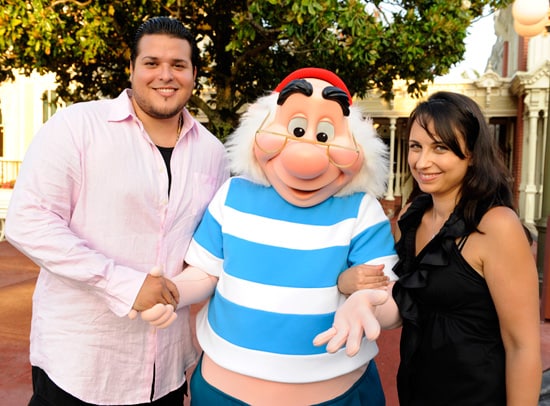 The famous song “It’s a Small World,” says it all. But no one knows it better these days than Alex and Donna Voutsinas. You might have seen their now-famous photo with Mr. Smee in the news recently, and today they visited Magic Kingdom park to recreate the snapshot.

The year was 1980, and young Donna was with her family at the Magic Kingdom park, posing for a photo along Main Street, U.S.A. with Mr. Smee and her brothers. What she didn’t know at the time was that her future husband, Alex, also would be in the background of the same photograph – riding in a stroller pushed by his father. (Alex and his family were visiting from Montreal; Donna and her family were visiting from Miami.)

Years later, as the couple looked through childhood photos one week before their wedding, Alex noticed something that immediately caught his eye.

“We were looking through pictures for our wedding video and my wife took this one out, and I noticed my dad,” Alex told the Disney Parks Blog this morning. “My dad used to have jet-black hair with a white tuft and I just noticed him right away. Then I saw myself in the stroller.”

The couple held onto the snapshot for about eight years. Two weeks ago, at the urging of friends and family, they posted it on Facebook. After the media and press discovered it on Facebook, their amazing story took flight and has since been reported around the globe.

Today, the couple visited the exact spot the snapshot was taken, recreating the famous photo with Donna’s picture pal, Mr. Smee. And this time, their own children – six-year-old Rocco, three-year-old Vince and one-year-old Antonio – posed with them and shared in the fun. The family now lives in Boynton Beach, Fla., and – as can be expected – are Disney Parks fans. Back at Walt Disney World Resort today on vacation, Alex and Donna were interviewed live from the Magic Kingdom on “The Early Show” on CBS, where they showed the magical photo from 1980 and recalled the moment that they learned of this Disney dream-come-true. That interview, as well as the now-famous, original snapshot, can be viewed at this link.