Gail Carson Levine and David Christiana Return to the Disneyland Resort on Another ‘Quest!’ 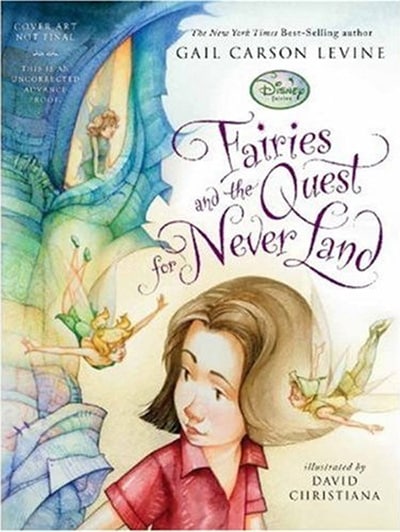 When I found out that Newbery Honor winning author Gail Carson Levine and renowned illustrator David Christiana would be returning to the Disneyland Resort, I immediately thought this is something I needed to share with all of you.

How many of you have read or have family and friends who have read the New York Times bestsellers, Fairy Dust and the Quest for the Egg and Fairy Haven and the Quest for the Wand? I’ll admit, I’ve only read one so far, but I’m hoping to squeeze in reading the other one before they get here. As a Tinker Bell fan myself, getting to know her through the storytelling and illustrations has renewed my appreciation for Tink and her fairy friends, too. Who knew there was so much magic to uncover?

These popular books first introduced us to Tinker Bell and her fairy friends, their magical world and their many adventures. In this third installment, titled Fairies and the Quest for Never Land, we are once again bound to find ourselves immersed in their world as they join forces and go to battle in an effort to stop an evil dragon named Kyto.

Here’s a little sneak peek at the storyline just to get you started…I’m pretty sure you’re going to love it.

Gwendolyn Carlisle loves fairies, perhaps too much. On her birthday, she receives the precious “kiss” necklace which has been passed down from mother to daughter ever since Peter Pan gave it to Wendy Darling. That night, Gwendolyn has the first of her visions—tantalizing, lifelike visions, almost as if she were actually in Fairy Haven. She sees animal talent fairy Beck give a pie to wise Mother Dove and hears the voices of water-talent Rani and even Tinker Bell herself.

More than anything, Gwendolyn wishes she could be there. When she is just about to lose hope, Peter Pan comes at last and blows fairy dust on her. The instant they reach Never Land, she sets out to find fairies. But the fairies are not eager to meet her.

Then the evil Kyto, a dragon the fairies once helped to capture, escapes. He intends to destroy Never Land, starting with Fairy Haven. The fairies have but one choice: they must stop Kyto. As they set out on their desperate quest—a quest that could be their very last—the fairies must decide if Gwendolyn can help or hinder…

Infused with magic and feeling, and bursting with excitement, this thrilling tale is sure to mesmerize you. I’m so excited for Gail and David, their new book and their return to the Resort. For those of you nearby who share my enthusiasm for Tinker Bell and her fairy friends, be sure to come out on Saturday, June 26th from 1 to 3 p.m. at The Disney Gallery or on Sunday, June 27 from 2 – 4 pm in Brisa Courtyard near the World of Disney Store, as we will be hosting both Gail and David for a special book signing. Imagine all of the pixie dust we can spread! For more information on the book signing, visit www.ArtofDisneyParks.com.

I hope you can make it!

Likes (0)
Share Gail Carson Levine and David Christiana Return to the Disneyland Resort on Another ‘Quest!’