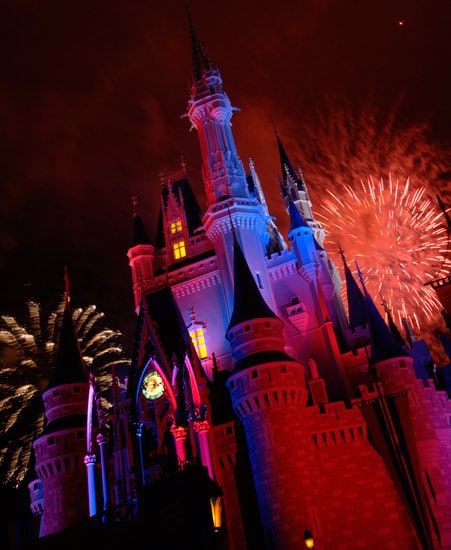 Get ready for a treat at Walt Disney World this Fourth of July — we’re celebrating with a unique choice of fireworks shows at several different theme parks. Magic Kingdom Park and Disney’s Hollywood Studios will have special pyrotechnics and Epcot will be adding a patriotic “tag” to its famous “IllumiNations: Reflections of Earth” spectacular. Here’s the specific breakdown:

Magic Kingdom – “Celebrate America Fireworks” will fill the sky at 9 p.m. After the fireworks, guests can enjoy Disney’s “Main Street Electrical Parade” of lights, music and magic at 10 p.m. and midnight. Park hours are 8 a.m.-1 a.m.

Disney’s Hollywood Studios – Special fireworks set to a rock ‘n’ roll soundtrack will be presented at 9:50 p.m., providing guests with a bonus nighttime entertainment extravaganza to complement “Fantasmic!” (which will be at 9 and 10:30 p.m.). Park hours are 9 a.m.-10 p.m.

Epcot – “IllumiNations: Reflections of Earth,” which features dazzling special effects, colorful lasers, brilliant fireworks and fiery torches all choreographed to a musical score, becomes even more dynamic on July 4 as the normal show is supplemented with a patriotic finale. The performance begins at 10 p.m. Earlier in the day, guests will be treated to the Voices of Liberty 4th of July Concert – featuring an expanded cast of singers plus the Spirit of America Fife and Drum Corps and Disney characters – at 12:30, 1:45 and 3 p.m. on the America Gardens Theatre stage. In addition, Betsy Ross will be engaging guests inside The American Adventure with storytelling, while Ben Franklin will be making appearances on the promenade near the attraction. Park hours are 9 a.m.-10 p.m.

Disney’s Animal Kingdom – Guests can enjoy all the regular attractions and shows on July 4 from 9 a.m.-8 p.m.

And of course, entertainment and park hours are subject to change without notice. So, who’s joining us this year?