‘What’s Next’ at the Disneyland Resort

We just opened a new nighttime spectacular, “World of Color,” and a reimagined attraction, Silly Symphony Swings, and began the second year of Summer Nightastic! at the Disneyland Resort, but there’s even more Disney magic on the horizon.

This morning we hosted an event called “What’s Next” and shared a look at what’s coming to Southern California in the next few months and years. Here are some of the headlines:

The “Adventures Continue” for the Jedi in All of Us – Kathy Rogers, Senior Show Producer at Walt Disney Imagineering, gave a huge update on the reimagining of Star Tours today. The new Star Tours 3-D attraction will debut in 2011 in Disneyland park and will bridge that “long time ago” between the two Star Wars™ trilogies. Kathy revealed today that the attraction will take voyagers – for the first time – to Coruscant and other destinations in the Stars Wars galaxy. Star Tours fans: please note that the attraction in Disneyland park goes on hiatus beginning July 27 to prepare for the all-new journeys, and the last departure to Endor will take place July 26. You’ll also be able to enjoy this exciting adventure in Disney’s Hollywood Studios at Walt Disney World Resort in Florida. See below for an image that was shared for the first time today that shows a StarSpeeder zipping through Coruscant.

The Disneyland Hotel Gets a Fabulous New Makeover and Features New Suites – Just announced today! Two all-new, over-the-top themed suites are joining the Pirates of the Caribbean suite and Mickey Mouse Penthouse: the Big Thunder Suite and Fairy Tale Suite. See our previous story that details all the changes coming to the Disneyland Hotel, including a new pool and water play area, enhancements to the existing pool, and new restaurant and bar.

Kids Sail Free to Mexican Riviera with Disney Cruise Line – For the first time today, we announced that guests 17 and under can sail free on the Disney Wonder for most seven-night cruises to the Mexican Riviera from January 23 to March 20, 2011, when accompanied by two full-fare paying guests occupying the same stateroom. How can you take advantage of this offer? Book it through July 31, 2010. Just visit disneycruise.com/kidsfree or call 888-DCL-2500, and make sure to mention or input booking code “KFMR” when making the reservation. Seven-night cruises to Mexican Riviera depart from the Port of Los Angeles and include visits to Cabo San Lucas, Mazatlán and Puerto Vallarta. This news follows other big announcements from Disney Cruise Line, including the new West Coast itineraries to Alaska and other destinations. For details, check out disneycruise.com/kidsfree and for all the rules and conditions, click here. 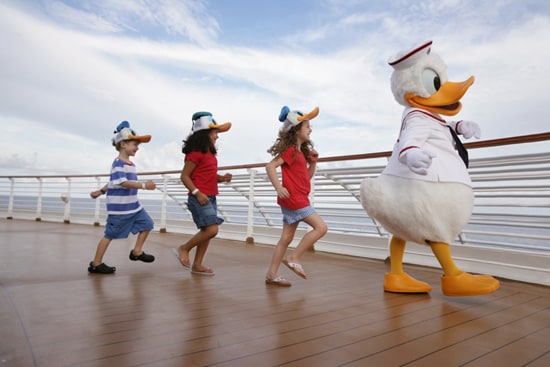 Next in Disney California Adventure Park – The Little Mermaid ~ Ariel’s Undersea Adventure: This is the next big milestone in the ongoing expansion of Disney California Adventure park, and we’ll be sharing more news here on the blog in the coming weeks. Today, we’re sharing one of the models from the “Under the Sea” scene for the new attraction. The Little Mermaid attraction, set to debut in 2011, will give new meaning to the phrase “immersive Disney attraction” by taking guests “under the sea” to experience magnificent scenes and magical songs from the popular motion picture. 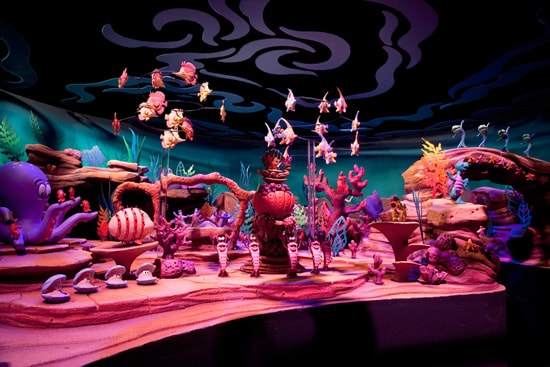 Summer 2012 – Hit the Road with Mater and Lightning McQueen: The best of Disney California Adventure park expansion may still be yet to come. Executive Producer and Vice President from Walt Disney Imagineering, Kathy Mangum, shared an update on Cars Land, the 12-acre expansion inspired by the Disney•Pixar blockbuster “Cars” that is set to debut in 2012. The land, modeled on the movie’s Radiator Springs setting, will feature three new attractions, including the E-ticket excitement of Radiator Springs Racers – taking guests zooming through the Cars Land landscape. Other Cars Land attractions will include Luigi’s Flying Tires (which should strike a chord with anyone who remembers the Flying Saucers in Tomorrowland) and Mater’s Junkyard Jamboree, a tow-truck themed attraction. The year 2012 will also see the completion of the new front entryway greeting park guests: Buena Vista Street featuring the Carthay Circle Theatre and the vintage Southern California Red Car Trolleys.

Kathy shared an artist rendering today that shows guests walking down Route 66, the main street of Cars Land, and a photo of a ride vehicle from Mater’s Junkyard Jamboree. 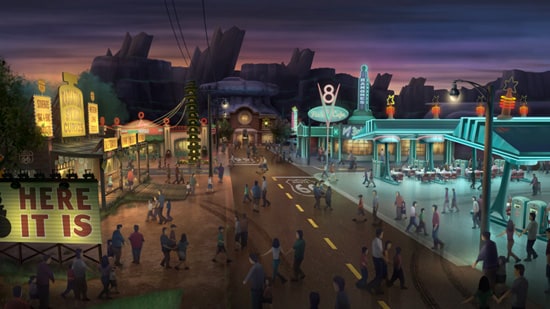 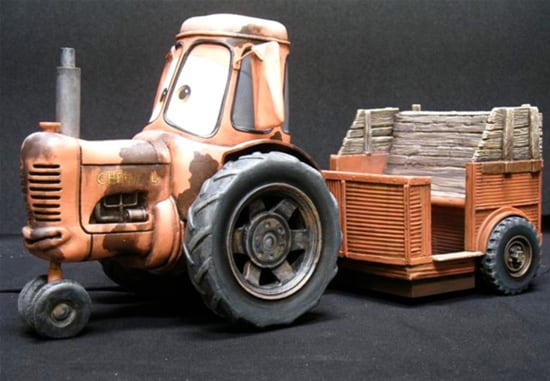 This is a lot of news to share all at once. What are you most excited about?

Destinations: ‘What’s Next’ at the Disneyland Resort