Disney Cruise Line Gives Back to Port Communities in Europe

At Disney Cruise Line, we take great pride in giving back to the port communities we call home, whether in Port Canaveral, The Bahamas and Caribbean or half-way across the world in Europe. The opportunity for our cast and crew members to volunteer their time to worthwhile causes is an important part of the Disney Cruise Line culture.

In a previous post, I mentioned one of the volunteer activities in which some 300 guests and crew members had the opportunity to paint a large mural that was donated to a hospital in Barcelona. However, this hasn’t been the only outreach effort our Disney VoluntEARS have participated in during our second cruise season in Europe. In fact, they have been quite busy over the last few months! And as our cruise season in Europe has progressed, so have the efforts of our Disney VoluntEARS.

Since departing Florida in April, Crew members from the Disney Magic have joined cast members from local Disney offices in Europe to accompany beloved Disney characters, in visiting deserving children in port communities spanning the Mediterranean and Northern Europe. Disney VoluntEARS delivered toys and smiles to over 1,000 children at hospitals and care facilities in 17 individual ports of call, across nine different countries, personally contributing more than 800 hours of volunteer service to benefit these local communities. 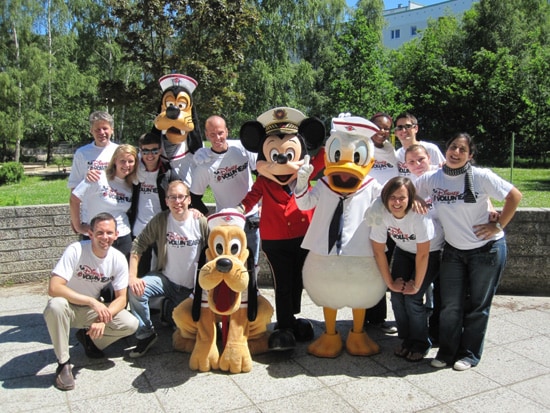 In Warnemunde, Germany, Captain Mickey and several of his pals posed for a photo during a visit to a school in the city that is known as the gateway to Berlin. Crew members were joined by representatives from the team working to construct our newest ship, the Disney Dream, in nearby Papenburg, to take part in the visit.

From playing a game of “hot potato” with Pluto to swinging on swings with Captain Mickey Mouse himself, it was an experience that the children will not soon forget … and neither will our Disney VoluntEARS.