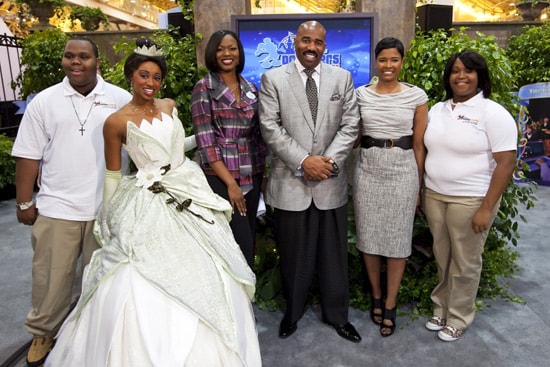 Great news to share – Essence Communications is joining our mission to inspire students as the newest “voice” behind the Disney’s Dreamers Academy with Steve Harvey. We just made the official announcement at the Essence Music Festival in New Orleans, home of our newest Princess, and we’re pretty excited about the collaboration.

In between hosting superstars like Alicia Keys, Janet Jackson and Mary J Blige at the festival, the Essence editor-in-chief Angela Burt-Murray joined us to announce that the event is being relaunched as Disney’s Dreamer Academy with Steve Harvey and Essence Magazine. Soon, Essence Disney Parks and Steve Harvey will begin formulating plans for the next “Dreamers” event in early 2011.

As you may know, the Disney Parks-created program offers amazing experiences for nominated students every year at the Walt Disney World Resort. The teens take part in several days of interactive workshops, mentoring and inspiration focused on careers and life enrichment. And Cast Members, executives and celebrities also share blueprints for success and motivational stories.

Nominations for the Class of 2011 can be submitted beginning today through October 31, 2010. For more information, check www.DisneysDreamersAcademy.com.