Flavors of Club Cool at Epcot 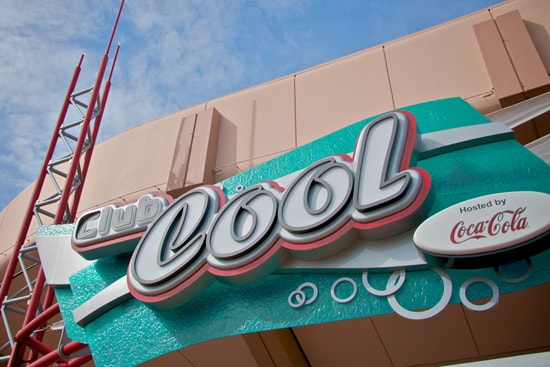 It’s that time of year when I look longingly as little kids abandon their shoes and run around getting soaked by the pop-up fountains at Epcot. For a whimsy-filled nanosecond I consider joining in the frolic. Ultimately, though, I leave “being a kid” … to kids: I can’t abandon my adult inhibitions!

So what’s a person to do: It’s sunny, and “warm” was fifteen degrees ago?

Well, one of my alternatives to acting like a kid by jumping into a fountain is a little spot in Innoventions at Epcot called Club Cool. It’s a place that sells Coca-Cola logo merchandise and “brain freeze” via frozen Coke.

But there’s also a “World Showcase kind of adventure” in Club Cool that doesn’t cost a penny and is a great thing to do on sultry summer days. It’s the fountains that dispense Coca-Cola products from other parts of the world. Here are the choices:

My favorites are Lift Apple and Smart Watermelon – which are usually in high demand and can run out on busy days. If I’d heard Club Cool was out of Beverly, though, THAT would surprise me (enough said about that!).

When I was in Club Cool a couple of weeks ago, I overheard other guests lamenting that the “pours” (as they called them) were so large. They truly were going on a world tasting adventure and just wanted a sip. As for me: I was going back for seconds of those wonderful drinks from Mexico and China.