The 55th anniversary of Disneyland park is tomorrow! Today’s post concludes our 11-week countdown as we look back to the very beginning of this magical place – the first five years.

A lot of great attractions opened in this five-year period, but the original attractions from opening day certainly stand apart from the rest.

We went into the Park and asked guests, “What is your favorite attraction from opening day, July 17, 1955?” Here’s what they had to say:

Let us know in the comments what your favorite attraction is from opening day, but before you do, make sure you brush up on your knowledge of the early years that made Disneyland park what it is today.

1960 – Just five years after opening its gates, Disneyland park continued to add new experiences. Nature’s Wonderland, based on Walt Disney’s film series ”True-Life Adventures,” opened in Frontierland, allowing passengers to travel by mine train or pack mule through Beaver Valley and the Living Desert. A new production in Circarama debuted, called “America the Beautiful.” Nine screens surrounded the audience with scenes from across the nation. “Dixieland at Disneyland” staged its inaugural performance with six Disneyland bands for a musical procession of boats and rafts on the Rivers of America, followed by concerts throughout the park.

1959 – Let the expansion begin! Three of the most famous Disneyland park icons made their debuts in 1959. Vice President Richard Nixon and his family were on hand to dedicate the Disneyland-Alweg Monorail System and were among the first to experience Walt Disney’s “highway in the sky.” The Matterhorn Bobsleds, considered the world’s first steel roller coaster, opened as the first coaster to allow multiple cars to run simultaneously on the same track. The eight original Disneyland submarines began their voyage in 20,000 Leagues Under the Sea in Tomorrowland. The “E-ticket” is introduced, entitling admission to select attractions. The tradition of Rose Bowl football teams visiting Disneyland park prior to the Pasadena New Year’s Day Game begins, with University of Washington and the University of Wisconsin.

1958 – The first Candlelight Procession took place on Main Street, U.S.A., and Dennis Morgan received the honor of being the first narrator. The special holiday event took place on two separate nights telling the story of Christmas with a full orchestra and mass choir. Guests could now take a trip down the rabbit hole with the introduction of the Fantasyland classic attraction Alice in Wonderland. The Sailing Ship Columbia, a full-size replica of an 18th-century sailing ship, began to navigate the Rivers of America. The 96-year-old Hopi Indian Chief Nevangnewa blessed the trains of the Santa Fe and Disneyland Railroad during dedication ceremonies for the Grand Canyon Diorama, the world’s longest diorama depicting the chief’s homeland.

1957 – Legendary film star Shirley Temple Black and Walt Disney were on hand to open Sleeping Beauty Castle Walkthrough. Guests climbed a staircase through the castle and walked by miniature dioramas that told the fairy tale of Sleeping Beauty. A section of the park was added called Holidayland. In the new area, guests could hold a company picnic, group events or conventions and dances. Date Nite at Disneyland park became the hot spot on Friday and Saturday nights from June to September with four Big Bands performing. The first celebration of New Year’s Eve took place on Dec. 31 with 7,500 guests.

1955 – This was the year! It only took a year to construct Walt Disney’s grand vision of “The Happiest Place on Earth.” On July 17, 1955, the first guests descended upon Anaheim for their chance to step into the movies at the Magic Kingdom. A 90-minute live broadcast on ABC network TV introduced the park to the world. There were 15,000 invited guests (more than 28,000 showed up through a mix-up in tickets), including dozens of Hollywood movie and TV celebrities. Co-hosts during the live broadcast were actors Ronald Reagan and Bob Cummings, TV’s Art Linkletter and network anchor Hank Weaver.

The opening day dedication speech presented by Walt Disney can be found on a plaque in Town Square: 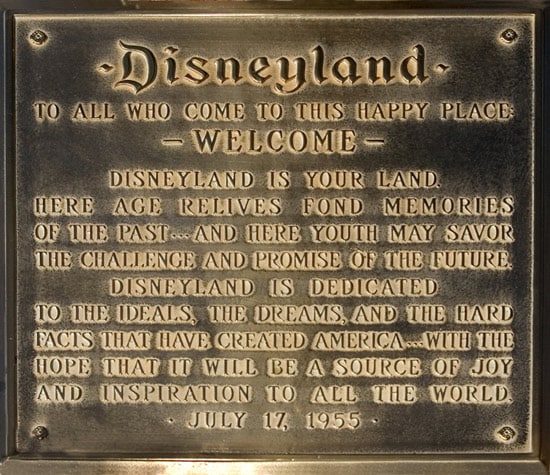 I hope you’ve enjoyed this series. I know I’ve had fun putting it together. If you’d like to review posts that cover other years in Disneyland park’s history, click the “Countdown to 55” link below.