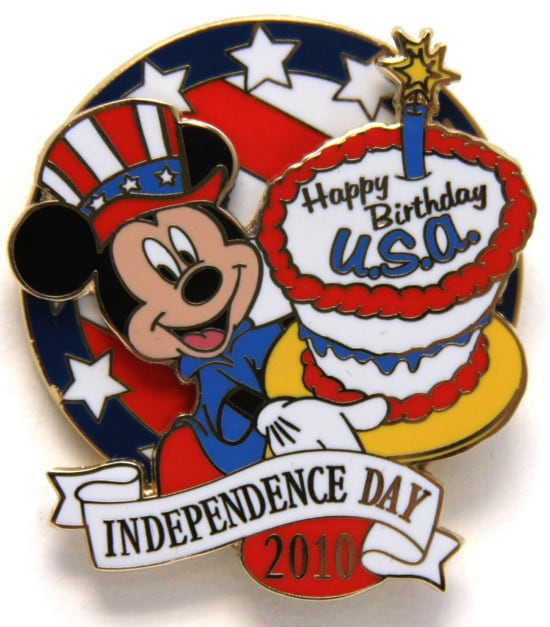 With the Fourth of July this weekend, I dug into the Disney Pin Vault for a retrospective on pins celebrating Independence Day. I found lots of pins featuring famous Disney characters, flags, stars, stripes and three colors again and again – red white and blue.

There were only a handful of pins celebrating the Fourth of July made prior to the start of Disney Pin Trading in October 1999 (many of them were issued to Cast Members as a form of recognition). In July 2000, Guests saw the release of retail pins at Disney Parks, and the annual Fourth of July pins were born. In Florida that summer, a pin was released at each Theme Park each with an edition size of 7500! 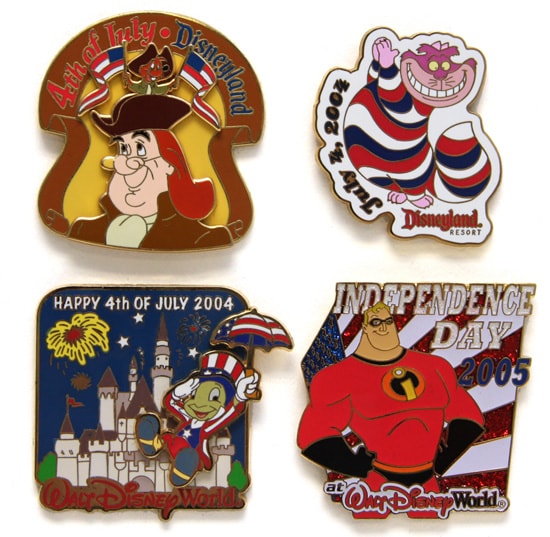 Throughout the years, many designs featured familiar faces such as Mickey Mouse, Minnie Mouse, Tinker Bell, Stitch and others. I personally enjoy, however, pins that featured characters you don’t see often. Some great examples include Ben Franklin and Amos from 2003; a patriotic looking Cheshire Cat from 2004; Jiminy Cricket also from 2004; and finally Mr. Incredible from 2005. 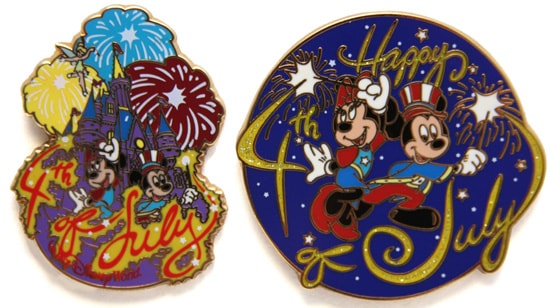 One of the more rare Fourth of July pins was sold at auction during Disney Pin Celebration 2008 at Epcot. Could we add any more details to this pin (pictured left above)? I have to admit – it wasn’t our best design (which is probably why it makes it so unique and why I put it up for auction). The final pin from 2008 (pictured above right) looks dramatically different. There is something wonderful about simplistic designs (opposed to adding everything but the kitchen sink).

Of course, I have a few of my favorites from the Vault. I love the pin featuring Donald Duck painting Spaceship Earth from 2004. I served as an Attraction Manager in World Showcase, and The American Adventure was one of the pavilions I managed. I love that show (and the Voices of Liberty – “That’s the Banjo.”). I even had the opportunity to meet the late Dallas McKennon who voiced Ben Franklin in the show. Awesomeness!

I also like the Disney characters reenacting the famous scene of George Washington crossing the Delaware. Such a classic image! It was a surprise pin released at Disneyland Resort in 2005.

The final pin I chose was also a surprise pin released on July 4, 2003, at the Walt Disney World Resort. While it doesn’t feature the words “Fourth of July” or “Independence Day,” it screams America to me. What is better than Mickey Mouse and those famous colors of red, white and blue?