Got your tickets? If not, better get a move on – the largest private party ever held during a Star Wars Celebration is right around the corner and you’ll want to see what’s now planned for the night. “Last Tour to Endor” will still feature a special Star Wars-themed fireworks show, a “Death Star Disco,” live entertainment and Disney Characters. But we’ve learned more about a special edition of Hyperspace Hoopla. 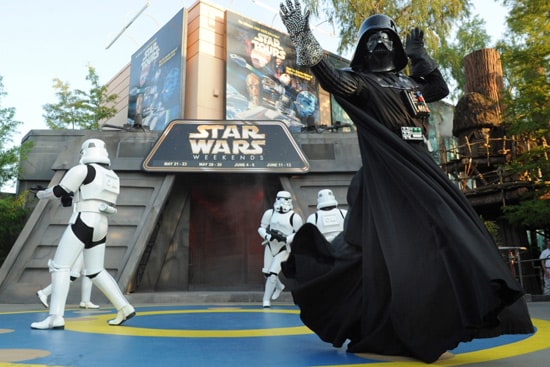 Yes, Star Wars characters (like Darth Vader) will be stepping out of their galaxy to dance just like they do during Star Wars Weekends at Walt Disney World Resort. And today, we can share an official lineup for the “Last Tour to Endor” stage:

-“Grease is the word” that Chewie heard: Chewbacca, Han Solo and the Jawas put on their dancing shoes (except Chewbacca of course, who will be frantically moving his furry feet) and perform a tune from the 1978 hit movie-musical “Grease.” In fact, Rebel spies have provided initial intel that Chewbacca’s fur will be fashioned into a 1950’s pompadour hairstyle just for the occasion.

-“Nobody puts Leia in a corner”: Luke Skywalker and Princess Leia will go back to the 1980s with a dance number from the box-office hit “Dirty Dancing.”

-“Strike a pose, there’s nothing to it”: Some of the most famous females from the Star Wars saga — including Queen Amidala, Ahsoka Tano, Zam Wessel and Aurra Sing — will join forces for an ensemble dance number set to one of the biggest pop hits by the “material girl” herself, Madonna.

-King of Pop, or King of the Dark Side?: Returning by popular demand will be Darth Vader and his crew of dancing stormtroopers, cutting a rug (and no, not cutting it with a light saber) to a hit medley from the King of Pop, Michael Jackson. At previous “Hyperspace Hooplas,” the Dark Lord has been known to even don a single, sequined glove as he channels the iconic music superstar.

Of course, event activities are subject to change without notice.

The party begins at 8 p.m. but “Last Tour to Endor” ticket holders can get a head-start on the fun at Disney’s Hollywood Studios as early as 4 p.m. We’re also offering free round-trip shuttles to the event from the Orange County Convention Center for all attendees.

Tickets for the August 14, 2010 event are $75 in advance and $89 at the gate (if available). For more information and to purchase tickets, check out www.starwarscelebration.com.