The Enchanted Tiki Room? ‘Great Moments with Mr. Lincoln?’ Swiss Family Robinson Treehouse? What is Your Favorite Addition Between 1961 and 1965? 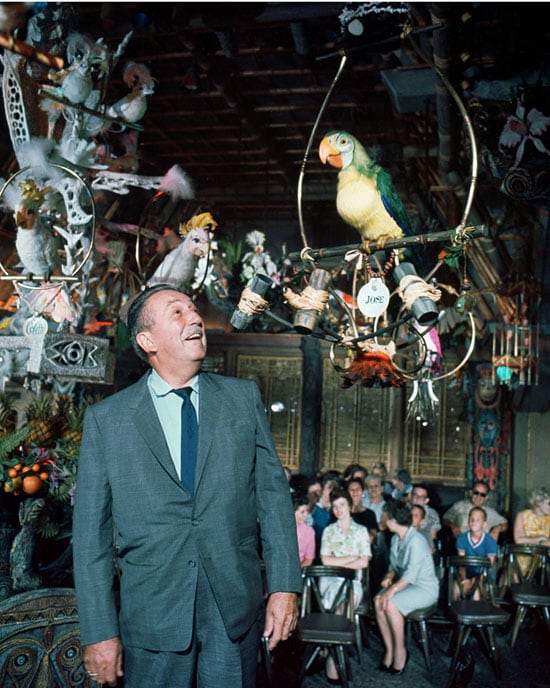 This week’s countdown covers 1965 to 1961. During this time, the Enchanted Tiki Room, the Swiss Family Robinson Treehouse, Great Moments with Mr. Lincoln and Flying Saucers all debuted at the Park.

The Enchanted Tiki Room stands out as a personal favorite for Kevin Kidney, a Disney artist who is well-known for his art and collectibles that are created for this classic attraction.

Kevin explains why The Enchanted Tiki Room is one of his favorite attractions: “The design of the Enchanted Tiki Room just thrills me, from the peaked-roofed exterior with the lanai full of Imagineer Rolly Crump’s whimsical Tiki god characters, to the dark interior crammed with all the great details. As a kid, I actually tried to build those fantastic bamboo-slat windows that “rain.” If I could live inside Disneyland, I would want my house to be the Tiki Room.”

What do you think? What is your favorite attraction that was added during this time?

1965 – Disneyland park marked its first decade with a yearlong “Tencennial.” Celebration elements included parkwide decorations, a grand parade and numerous special events throughout the year. To help represent the park during the busy year, the role of Disneyland Ambassador to the World was created. Tour guide Julie Reihm was selected as the first “Miss Disneyland” — as the position was originally called — and she spent the year traveling throughout the United States and the world as the official emissary of Disneyland park. 3D Jamboree debuted at the Fantasyland Theater starring Mouseketeers. The film was presented in 3D, a technology that wouldn’t be used again at Disney Parks until Magic Journeys was produced for Epcot 25 years later. Also in 1965, Great Moments with Mr. Lincoln found its permanent home in the Opera House on Main Street, U.S.A.

1964 – Although the 1964 New York World’s Fair didn’t actually occur at the Disneyland Resort, many of Walt Disney’s exhibits for the fair found their permanent homes in Disneyland park after debuting for enthusiastic Fair audiences. Walt used the opportunity of presenting at the Fair to fine-tune and perfect his technologically advanced Audio Animatronic figures through four exhibits: “it’s a small world,” “Progressland,” The Magic Skyway and “Great Moments with Mr. Lincoln.” Of course we all know that Great Moments with Mr. Lincoln and “it’s a small world” are now classic Disneyland attractions, but “Progressland” also came to the park as The Carousel of Progress, and The Magic Skyway utilized omnimover technology, which was used in many Disneyland classics including The Haunted Mansion. Disneyland also hosted more than 400 American athletes heading to Japan for the 1964 Summer Olympics. Events included a tribute show on the shores of the Rivers of America, featuring Bob Hope and a cast of Hollywood stars.

1963 – In 1963, the then-groundbreaking technology of sophisticated Audio Animatronics debuted to Disneyland park guests in an attraction that was touched by Walt Disney in every aspect of its planning. The Enchanted Tiki Room opened in Adventureland, featuring colorful singing birds, delicate singing flowers and powerful tiki gods. With its infectious songs and lovable hosts — Fritz, Michael, Pierre and Jose — the Enchanted Tiki Room is still a favorite with park guests of all ages. Walt also hosted a press conference to explain his upcoming Audio Animatronics exhibits for the New York World’s Fair the following year.

1962 – Guests were invited to live the life of adventure by climbing and exploring the new Swiss Family Robinson Treehouse, towering 70 feet over Adventureland.The year 1962 also saw the debut of the Safari Shooting Gallery – where the guns actually used real pellets! Also added in 1962: the picturesque elephant bathing pool within the world famous Jungle Cruise. Walt Disney also celebrated the 10,000th performance of the Golden Horseshoe Revue by airing it on television with its stars, including Betty Taylor, Wally Boag, Gene Sheldon and Ed Wynn.

1961 – This marked the year that the beam of the Disneyland Monorail, the transportation of the future, was expanded to reach the Disneyland Hotel. The Monorail began whisking hotel guests past the Main Entrance ticket booths and directly into Tomorrowland, where the hovering Flying Saucers debuted the same year for space travelers. Guests could also wish for their own Prince Charming at a quaint wishing well alongside marble statuettes of the seven dwarfs at Snow White’s Grotto. 1961 was the first year a Grad Night was hosted in Disneyland Park and 8,500 graduating seniors came to celebrate their accomplishments at the Happiest Place on Earth.

Likes (1)
Share The Enchanted Tiki Room? ‘Great Moments with Mr. Lincoln?’ Swiss Family Robinson Treehouse? What is Your Favorite Addition Between 1961 and 1965?